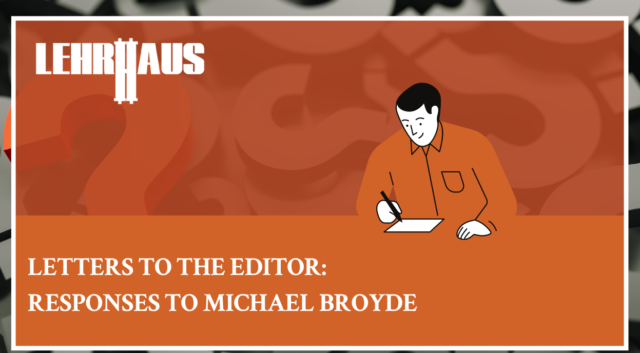 I read with interest the article in The Lehrhaus entitled “What Does Jewish Law Think American Abortion Law Ought to Be?” by my distinguished colleague, Rabbi Professor Michael Broyde. But I would like to disabuse readers from two misconceptions regarding the position of Rabbi Moshe Feinstein, arguably the most important posek of the last century.

Firstly, Rabbi Broyde writes, “At the same time, it is equally obvious that Noahide Law prohibits more abortions for Gentiles than Jewish Law does for Jews.” But Rabbi Feinstein clearly would not agree with that statement. According to him, anytime abortion is prohibited for a non-Jew it is obviously prohibited for a Jew, but the reverse is not necessarily true. For example, he raises the possibility in his landmark teshuvah on the subject that abortion before forty  days of conception might be permitted for a non-Jew in certain circumstances but prohibited for a Jew (Igrot Moshe, Hoshen Mishpat 2:69.3)

Rabbi Feinstein based this position on his understanding of the sources, particularly the principle “can there be any act that is permitted to a Jew and at the same time forbidden to a Noahide?” (Hullin 33a), which for him is a Torah prohibition. There are of course others who disagree with this strict application of the principle, but this is not the place to discuss the halakhic and theological implications of this fundamental disagreement in Jewish law (for a more extensive discussion of this principle and its relation to abortion, see my article here).

Secondly, Rabbi Broyde draws upon Rabbi Feinstein’s position regarding brain death legislation: “Writing about proposed legislation regarding brain death, he first noted the need, at a minimum, for a conscientious or religious exemption clause in secular laws that mandated a particular view of life and death decision-making but ultimately favored a broader view—that governments ought not pass any such laws at all.” He concludes by applying this approach to the issue of abortion: “More broadly, I think American Orthodoxy gains much more than it loses by adopting Rabbi Feinstein’s final view, above; i.e., it should oppose secular laws that restrict citizens’ personal moral choices.”

However, regarding the subject at hand, it seems to me that Rabbi Feinstein would not agree with Rabbi Broyde’s conclusions, even if they are based on some of Rabbi Feinstein’s ideas and writings. In his restrictive teshuvah on abortion quoted above, he concludes: ”I wrote all this because of the great increase in the world where many countries are now allowing fetuses to be killed, including the State of Israel.” For Rabbi Feinstein, maintaining that there is a constitutional right to abortion would be the same as maintaining there is a constitutional right to murder your neighbor.

Nevertheless, as Rabbi Broyde points out, the above discussion only represents the position of Rabbi Feinstein. There are other leading poskim, such as Rabbi Eliezer Waldenberg, who permit abortion in cases of fetal abnormalities or illicit relationships, primarily because of the great psychological and emotional harm the pregnancy and birth could bring upon the woman and her family (see, e.g., Tzitz Eliezer 13:102.1, 14:101.2.). For these poskim, there is clearly no connection between murder and abortion. But it should be noted that Rav Moshe specifically wrote in his teshuvah that one should not follow the opinion of a certain hakham in Israel (alluding to Rabbi Waldenberg) who was permissive in allowing abortion in certain circumstances.

Having read Rabbi Michael Broyde’s article on what Jewish law thinks abortion law ought to be, I would like to take issue with his reasoning and attendant conclusions.

Rabbi Broyde cites approvingly the opinion of Shakh (Yoreh De’ah 151:6) that a Jew may assist a non-Jew in sinning when he has other ways of violating the law without the Jew’s help. However, Shakh’s view is problematic. First of all, Rema (ibid.) mentions dissenting views that such conduct nevertheless violates a rabbinic prohibition, just as one may not assist a Jew in sinning in any manner.

Moreover, my Rav, Rabbi Nachum Eliezer Rabinovitch, of blessed memory, wrote extensively on the mitzvah of lifnei iver and showed decisively that the aharonim almost universally agreed to limit the scope of the law because they did not have the work of Rabbeinu Hananel, who offers an alternative explanation of the key Talmudic passage on the subject.

According to Rabbeinu Hananel (Avodah Zarah 6b), even the slightest encouragement violates a biblical command. The Talmudic passage states that one violates lifnei iver only when the sinner stands on the other side of a river. The standard explanation for this caveat is that the sinner has no other means of reaching the forbidden item, and thus the other person’s help is instrumental in causing sin. However, Rabbeinu Hananel explains that one only violates lifnei iver when “a river separates them, so he [=the sinner] cannot overpower him and take it forcefully.” This gloss implies that unless the sinner can compel a Jew to assist him, lifnei iver remains prohibited, even when the help is not instrumental in causing sin. This view was accepted and codified by Rambam in thirteen places (see Melumdei Milhamah 4:3, pp. 33-35).

From the above, one may certainly doubt whether Shakh’s view is the proper one to adopt. His view holds weight, but we should not simply discard the other, more stringent views. I find it hard to accept a Jew advocating for a clear violation of Torah law. Additionally, even if we follow Shakh, I wonder whether direct advocacy for sin is truly analogous to a Jew selling products that a non-Jew may use for sin, which is Shakh’s original context.

Is there a compelling reason not to advocate for strict abortion policy?

Beyond the halakhic discussion, Rabbi Broyde doubts the wisdom of advocacy for strict abortion law. However, is it truly the case that, as Rabbi Broyde claims, “we do not view secular law as the suitable vehicle to enforce morality?” While this view is popular amongst classical liberal political theorists, others, mostly republican theorists, have long acknowledged that, to an extent, culture is downstream of law. Maimonides made this point forcefully: “The government of a city… shows them how to use their habits in abandoning illusory happiness so that they will neither desire it nor delight in it; and it explains to them what is illusory evil so that it will cause them no pain or grief… The sages of the peoples of antiquity made rules and regulations, according to their various degrees of perfection, for the government of their subjects.” Many other republican theorists also noted the crucial role law plays in shaping morals – whether we would like it to or not, and the republican tradition with its roots in Aristotle played a pivotal role in the ideology upon which the United States was founded.

The second point Rabbi Broyde mentions, however, is more misleading. He marshalls Rabbi Moshe Feinstein’s statements regarding halakhic death. He quotes Rav Feinstein as saying, “[T]he United States of America, does not want… to force anyone to violate the laws of the Torah.” Yet Rabbi Feinstein wrote about a law that may have compelled Jews to engage in actions prohibited to them. However, we are looking at a problem of a completely different nature. Abortion laws may prohibit some actions that Jews are permitted to engage in, according to some authorities. Jews would not be compelled to violate halakhah because all the relevant laws make exceptions for cases of danger to the mother’s life – the only case of a halakhic obligation to abort a fetus. I do not think anyone seriously thinks that the law must allow everything Jewish law – or any other religion’s laws – merely permits.

Many authorities, such as Rambam (Mishneh Torah, Hil. Issurei Bi’ah 10:1, Hil. Bekhorot 4:12), maintain that a fetus does not have halakhic status as such until forty days after fertilization; therefore, there is no prohibition preventing non-Jews from killing the fetus before then. After that point, the law must prohibit such killing to abide by Noahide law.

However, there may still be room for exceptions. The Talmud and Rambam present all Noahide law as rules enforced through capital punishment. Non-Jews must set up courts and convict and sentence those who violate the law by the word of one witness in front of a single judge. Yet Rabbi Yosef Eliyahu Henkin (“Ketz Ha-yamin,” Ha-darom 10) interpreted these stipulations not as obligatory parameters but as guidelines defining the extremes of the Noahide justice system. Non-Jews must have a legal system that utilizes at least one witness and judge for a conviction, and they may dole out capital punishment, but it is certainly proper to pass laws like those in the United States that require a broader deliberating body such as a jury instead of a single judge for conviction. Additionally, they need not apply capital punishment, and they may choose lesser punishments or refrain from punishing certain acts.

Rabbi Henkin’s view does not allow non-Jews to completely ignore the basic requirements of any Noahide law, but it does suggest that non-Jews may make exceptions for extraordinary circumstances. It follows that the law must prohibit abortions after forty days from fertilization, but it may allow exceptions for issues such as severe fetal defects, serious health risks to the mother, or other similar complications.

In my opinion, it is incumbent upon us, as Orthodox Jews, to support such laws. Though these laws prevent abortion before forty days, measured from fertilization, the other laws being proposed outlaw abortion from fifteen weeks, much too late according to Noahide law. Ideally, Jews would push for bans at eight weeks gestational age, with the stipulated exceptions, but politics is a game of opportunities, not ideals. If forced to choose between the end of the first trimester and six weeks, the latter is the proper option.

A Time to Mourn: Aveilut as Minor Holiday