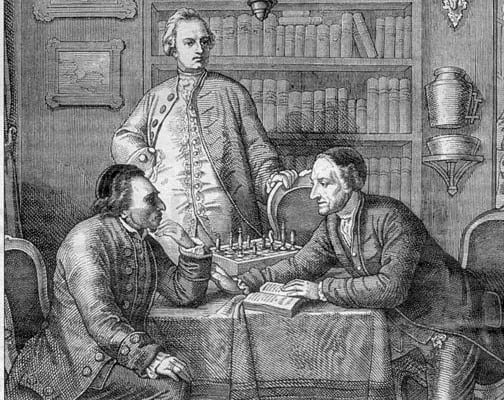 How do we know what we know? Various individuals and schools have provided different approaches to this age-old question. Judaism largely emphasizes tradition, as Pirkei Avot opens: “Moses received the Torah at Sinai and passed it on to Joshua.” Philosophy, on the other hand, emphasizes logic; demonstrable proofs frame our knowledge. Many classical Jewish thinkers, of course, did not believe these two approaches to be mutually exclusive. But one figure who may be described as “mysterious” is Moses Mendelssohn. On the one hand, the eighteenth century intellectual was the man who famously beat Immanuel Kant in a prestigious essay contest, who passionately argued for the right of Jews to be full members of German society.

On the other hand, he was Rav Moshe of Dessau, who was a highly learned Jew and maintained connections with top Torah scholars of his generation. Many have tried to argue that he did not successfully live both roles in harmony, that his Torah and philosophy are irreconcilable. Is there possibly any evidence, though, that his philosophical and religious selves shared unified, common ground? Moreover, is it possible for anyone to use two systems of knowledge to arrive at the same convictions?

The question is complex. Yet, there is, perhaps, a fairly simple way to evaluate this question: of Mendelssohn’s writings, he composed two seminal works, one of which is a commentary on the Torah, called Sefer Netivot Ha-Shalom (informally known as the Bi’ur), and the other, his magnum opus, is a philosophical treatise entitled Jerusalem. Both were completed in the early 1780s. In these works, Mendelssohn addresses a foundational issue that may itself speak to his approach to the question we opened with: how do we know what we know? More specifically, for religious people, how do we know God exists? Given that biblical commentary and philosophical treatises may serve different aims, it is striking to see how his views on this subject, and several others, emerge in harmony with similar messages.

The dramatic events that took place atop Mount Sinai are often called “Revelation.” God’s existence as a core principle of Judaism, so to speak, appears at the beginning of this revelation, in the aseret ha-dibrot, the Decalogue. The first item God states is “I am the Lord your God who brought you out of the land of Egypt, the house of bondage” (Exodus 20:2). While this statement is often counted as the first of the “Ten Commandments,” was this the moment that the Israelites suddenly affirmed God’s existence?

In many classical sources, as Mendelssohn notes, all ten statements of the Decalogue are counted as separate commandments among the 613, including the one just mentioned. Maimonides uses this verse as the basis for counting belief in God as the first commandment in his Sefer Ha-Mitzvot, and Sefer Mitzvot Katan similarly does so. In addition, Ramban, Sefer Mitzvot Gadol, and Sefer Ha-Hinukh also hold that belief in God is a commandment. However, Mendelssohn cites the author of Halakhot Gedolot (known as Bahag), who is of the opinion that this statement does not constitute a separate commandment. Bahag’s reasoning is that “while the 613 commandments are all decrees of the Holy One, blessed be He … the belief in His existence, may He be exalted—which is the principle and root from which the commandments derive—is not included in this enumeration [of the Torah’s commandments].”[1] In addition, Abarbanel (Exodus 20:2) felt that this statement “is neither a commandment of belief nor a commandment of practice, but rather a premise of the commandments.”

These intelligibles will neither be confirmed, nor be firmly established in the heart of one who is ignorant of them and despairs of comprehending them, by means of the Eternal uttering ‘I exist,’ or by means of thunder, lighting, a dense cloud, and the sound of a shofar.[3]

Instead, to reach belief in God, one needs to already hold a received tradition of God’s existence, determine this truth independently, or learn the existence of God from other reliable people, be they older family members or scholars. Mendelssohn argues that the Israelites believed in God long before revelation and passed on this belief through each generation; it is a pillar of tradition. But only those who already believe in God experience revelation as divine, and that experience requires prior learning by some means or another. One could argue that, nevertheless, this does not mean that belief in God is not a commandment, but Mendelssohn claims that the main purpose of the first statement is “to single out [the children of Israel] as a treasure from all the peoples.”[4]

Therefore, the statement “I am the Lord your God” is, as Abarbanel claimed, a preface to the other statements, intended to convey the purpose of revelation itself, and it begins only with a pre-existing knowledge of God.

On the other hand, supernatural proofs of God’s existence, as Mendelssohn writes in his commentary on Exodus, are unpersuasive. Rather, we achieve an understanding of God through the intellect. In another location in the Bi’ur, Mendelssohn devotes a large amount of attention to this issue, except in the inverse. The Torah prohibits listening to anyone claiming to be a prophet through the usage of signs and wonders (Deuteronomy 13:2-6). Such claims, explains Mendelssohn, run contrary to Judaism because they defy rational proofs of God’s existence. Once one has come to understand God through logic, any miraculous counter-proof will by definition contradict the already existing logic. For Mendelssohn, God’s existence is a given, as is God’s perfection, so once one attempts to contradict God’s dominion through some wonder, one is declaring an impossible and false reality. His commentary here remains consistent with his general approach to understanding God’s existence. It must be grounded in sound logic, and external wonders are not proof of God’s existence or lack thereof.

This sentiment is echoed in Jerusalem. In strikingly similar terms, Mendelssohn argues that the purpose of revelation was to present Torah laws, not to proclaim God’s existence:

In reality, it could not have been revealed there, for who was to be convinced of these eternal doctrines of salvation by the voice of thunder and the sound of trumpets? Surely not the unthinking, brute-like man, whose reflections had not yet led him to the existence of an invisible being that governs the visible. The miraculous voice would not have instilled any concepts in him and, therefore, would not have convinced him … He demands rational proofs, not miracles.[5]

Mendelssohn agrees that anyone who was present at revelation may have experienced wonder of some sort at the natural sights, but it would not have convinced anyone of anything new or life altering, unless “it was, perhaps, taught, explained, and placed beyond all doubt by human reasoning during the days of preparation.”[6] It is at this point that Mendelssohn explains the verse “I am the Lord” to serve as a historical foundation for the commandments but not as a new truth or requirement on its own. All of these historical truths may be ratified by miracles, but miracles alone do not serve as proof. In his own words, “miracles and extraordinary signs are, according to Judaism, no proofs for or against eternal truths of reason.”[7]

Therefore, just as miracles cannot prove God’s existence, they cannot be used to disprove God’s existence, as the passage of the false prophet in Deuteronomy conveys. Furthermore, in the Bi’ur, Mendelssohn suggests that the natural world itself speaks of God’s dominion without the need for loud proclamations, and it is possible for any human being to come to conclusions this way. Likewise, in Jerusalem, he asserts that eternal truths are taught “not by sounds or characters … but through creation itself, and its internal relations, which are legible and comprehensible to all men.”[8] Miracles, then, are neither necessary nor sufficient for establishing God’s existence.

This approach to revelation also informs Mendelssohn’s view of other religions. Since God’s existence is discerned through the intellect, and revelation at Sinai does not serve the purpose of proving this point, Mendelssohn affirms the validity of other religions (although it is fascinating that he strongly condemns atheism, calling it an illness that makes society “sick and miserable, whether it is worn down by cancer or consumed by fever”).[9]

They, too, believe in God, and the Jews are not superior to others in this respect. Interestingly, while Mendelssohn appreciates diversity and carries a universal message, he does refer to Israel as the “treasured religion” in this context. In fact, earlier in the Bi’ur, Mendelssohn comments on the epithet “am segulah” (treasured nation), that Jews are chosen, separate from other nations, and they have a special role. But his message is that while Judaism’s laws and way of life are unique, that does not contradict the legitimacy and contributions of other religions. In Jerusalem as well, he writes, “Judaism boasts no exclusive revelation of eternal truths that are indispensable to salvation, of no revealed religion in the sense in which that term is usually understood.”[10] His proof here, as in the Bi’ur, is precisely the point that God’s revelation was not affirming God’s existence at large but rather identifying God who took the Israelites out of Egypt. The uniqueness of Judaism is found in its way of life, not in “doctrinal opinions.” It seems, then, from multiple passages, Mendelssohn maintains consistency in the Bi’ur and Jerusalem in his approach to revelation.

On one level, it is interesting for academic purposes that Mendelssohn’s conceptions of the role of revelation, and his methodology, are consistent in the Bi’ur and Jerusalem. Beyond that, though, it should also be of religious interest to those of us who value the wisdom of the humanities as complementary to Torah.

Yet, his philosophy and Torah did not always talk past each other, and some scholars argue that he truly lived in both worlds.[11] What I have shown is just one case in which Mendelssohn’s ideas are presented as unified in Jerusalem and the Bi’ur. This has already been pointed out by Michah Gottlieb, who suggests, “Mendelssohn adds important excurses that complement his German philosophical writings … The Bi’ur is thus an important source for understanding Mendelssohn’s philosophy.”[12] These examples alone may not prove one way or another what Mendelssohn really felt and believed over the course of his lifetime.

In evaluating Mendelssohn’s contributions, though, we should be aware that his intellectual life did achieve harmony at least in some respects, and many of those ideas were actually informed by traditional Jewish sources. It may be fruitful for Modern Orthodox Jews to study Mendelssohn more carefully—even if not to accept his ideas or lifestyle themselves—to learn from his approach to Jewish thought and living. In a world in which we are exposed to endless avenues of knowledge, he may help us navigate the way in which we know.

[2] Curiously, while Mendelssohn’s views align with those of Hasdai Crescas, he does not quote Crescas in the Bi’ur but does mention him in the relevant sections of Jerusalem. See William Zev Harvey, “Hasdai Crescas and Moses Mendelssohn on Beliefs and Commandments” in Moses Mendelssohn: Enlightenment, Religion, Politics, Nationalism, ed. Michah Gottlieb (Bethesda: University of Maryland Press, 2015), 87.