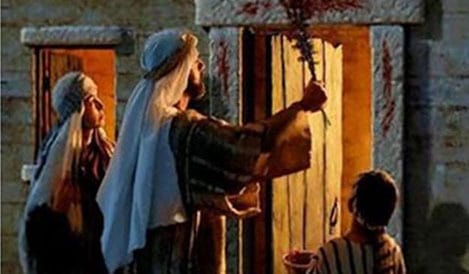 This month shall mark for you the beginning of months; it shall be the first of the months of the year for you. Speak to the whole community of Israel and say that on the tenth of this month each of them shall take a lamb to a family, a lamb to a household … You shall keep watch over it until the fourteenth day of this month; and all the assembled congregation of the Israelites shall slaughter it at twilight.

In these verses, God commands Moses to instruct each Israelite family to take what would become the paschal lamb on the tenth of the first month, four days before it was to be slaughtered. The Israelites are told to keep watch over the lamb from the tenth to the fourteenth of the month. Then, they are to slaughter it.

Why, we wonder, was it necessary to take and keep watch over the lamb for those four days? For that matter, why was it necessary to command this as part of the process at all? The commandment could have been limited to the offering of the lamb, which would necessitate each Israelite to acquire the lamb beforehand on logistical grounds.

Why did Scripture require that the paschal lamb be taken four days before its sacrifice? Rabbi Matia b. Heresh would say: Behold, it says “Now when I passed by you, and looked upon you,  and, behold, your time was the time of love” (Ezekiel 16:8). The time arrived for The Holy One to fulfill the promise made to Abraham our father that He would redeem his sons, but they had no mitzvot to busy themselves with in order that they might be redeemed! As it says, “Your breasts were fashioned, and your hair was grown; yet you were naked and bare” (ibid. 16:7); that is, nude of the mitzvot. The Holy One (therefore) gave them two mitzvot: that of the paschal lamb and of circumcision, that they should busy themselves with them in order that they be might be redeemed. As it says, “And when I passed by you, and saw you wallowing in your blood, I said to you: In your blood, live; I said to you: In your blood, live” (ibid., 16:6). And furthermore it says “As for you also, because of the blood of your covenant ( I send forth your prisoners out of the pit wherein is no water)” (Zechariah 9:11). Therefore, Scripture required that the paschal lamb he taken four days before its sacrifice: for we are rewarded only for deeds.

In the first response to this question, Rabbi Matia ben Heresh deploys a midrash (cited by Rashi on Exodus 12: 6) on a celebrated passage in Ezekiel 16, in which the prophet describes how a passer-by rescues an abandoned infant girl, washing and swaddling her, bringing her home, and eventually, when she grows up, marrying her. The story is taken as a metaphoric retelling of God’s salvation of Israel in Egypt, in which Israel is pictured as a helpless babe dependent on divine intervention.

Several features of the Ezekiel passage indicate that it is indeed referencing features of the Egypt narratives, most prominently the reference to God’s seeing and passing-over (va-e’evor alayikh) the infant, evoking Exodus 12:23. In Ezekiel’s telling, the Passover story is a tale of grace, in which God saves Israel the helpless babe, raises her, and marries her (See Keritot 9a).

Rabbi Matia, however, inverts the order of the verses in Ezekiel, working backwards from verse 8 to 7 to 6. This inversion, coupled with his midrashic interpretations of those verses, creates an inversion of Ezekiel’s message as well: Israel is saved, not out of grace bestowed to an undeserving and helpless foundling, but because they have earned salvation via their performance of mitzvot. According to the parallel recension of this midrash in Pirkei De-Rabbi Eliezer 29, the mitzvah of the paschal sacrifice, exemplified in the smearing of its expatiating blood on the doorposts and lintels, is literally co-mingled with the blood of the related mitzvah of circumcision (for only circumcised males were allowed to eat of the lamb).

According to the midrash, the Israelites merited God’s “passing over” because of the mitzvot of the paschal sacrifice and circumcision. Similarly, the Mekhilta argues, the Israelites are instructed to extend their performance of the commandment of the paschal lamb to a four day enterprise. In the words of Ezekiel, by our blood we live—that is, by our mitzvot.

In part, I would argue, the notion that the blood of circumcision protects the Israelites during Passover is generated by the similarities between Exodus chapter 12 and earlier in chapter 4, in which Moses is attacked by a mysterious destructive power and is only saved when his wife circumcises their infant son and touches (“va-taga,” paralleling “ve-higatem” of Exodus 12:22) Moses with the bloody foreskin. Moses, the bloody bridegroom, is saved by virtue of the mitzvah and blood of circumcision. The Mekhilta here expresses this relationship by transposing a feature of chapter 4 (the protective application of circumcision blood) onto the narrative of chapter 12, co-mingling the bloods and stories.

Yet there is more to this midrash. The claim that the mitzvot of circumcision and the paschal sacrifice saved—indeed, are necessary for saving—the Israelites from death, stands in stark contrast to a competing claim circulating at the time. This is found in Justin’s Dialogue with Trypho, Chapter 111:

[O]ur suffering and crucified Christ was not cursed by the law, but made it manifest that He alone would save those who do not depart from His faith. And the blood of the passover, sprinkled on each man’s doorposts and lintel, delivered those who were saved in Egypt, when the first-born of the Egyptians were destroyed. For the passover was Christ, who was afterwards sacrificed, as also Isaiah said, ‘He was led as a sheep to the slaughter.’ And it is written, that on the day of the passover you seized Him, and that also during the passover you crucified Him. And as the blood of the passover saved those who were in Egypt, so also the blood of Christ will deliver from death those who have believed. Would God, then, have been deceived if this sign had not been above the doors? I do not say that; but I affirm that He announced beforehand the future salvation for the human race through the blood of Christ.

In this reading, the blood on the doorposts signals the blood of Jesus, which saves from death all those who would otherwise be cursed by the law. The commandments kill; only faith in the Christ vivifies. An understanding of Jesus as the paschal lamb, whose blood expiates, is found in the Gospels, e.g., Matthew 6:26-28:

In fact, I Corinthians 5:3-8 states all this much more explicitly: “Purge out the old leaven, that ye may be a new lump, even as ye are unleavened. For our passover also hath been sacrificed, even Christ.” The Mekhilta here counters precisely this claim. The blood of the literal paschal lamb, metonymic of mitzvot in general, are the only source for ‘salvation.’ It is only the law, that is, which can redeem. Hence, the conclusion of the midrash: “Rabbi Matia ben Heresh’s argument that we may redeemed only through deed—i.e., mitzvot—stands in opposition to the Pauline notion that redemption is achieved not by deed (works), but via faith in Jesus:

If this analysis is correct, this explanation provides yet another explanation for the claim that the blood of circumcision—and not only of the lamb—was painted onto the lintels of Israelites’ homes. The necessity of circumcision for entry into the covenant and people of Israel, after all, is denied (at least for Gentiles) by Paul (for example, in Galatians 6:15; Colossians 2:11). Rather than salvation achieved via belief in the ‘Paschal Lamb, ’ through whose blood we are redeemed, for the Mekhilta, we are redeemed via the blood of the literal paschal lamb and the blood of the circumcision ‘in the flesh;’ or, more broadly, via ma’aseh—in other words, via the work of mitzvot.