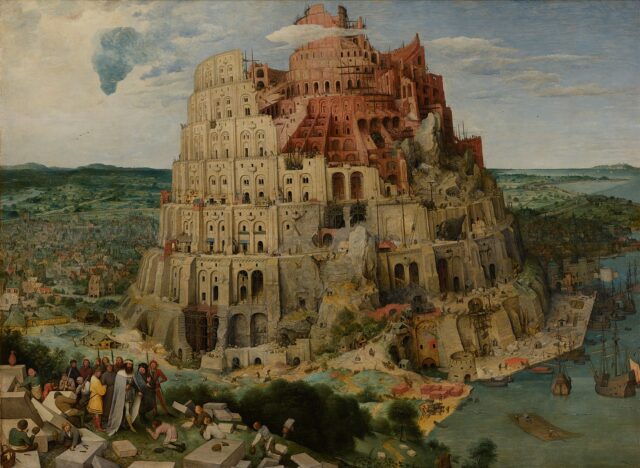 Throughout the biblical narrative, few vocations are held in as high esteem as that of sheep herding. No less than Moses, Jacob, and David claim the illustrious title of shepherd. In contrast to the shepherds’ exalted characters, the farmer, hunter, and city builder count in their ranks the biblical characters Cain, Esau, and Ishmael. Cities and their founders seem particularly looked down upon in the Bible. Rather than Adam, Noah, or Abraham, it is the first murderer, Cain, who becomes the founder of the first city (Genesis 4:17). Yet, it is not just the founders of cities who seem consigned to suffer the Bible’s ire and condemnation. Not only is Paradise in the Bible a garden, not a city, but even when cities (Sodom and Gomorrah) are “like the Garden of the Lord” (Genesis 13:10) they are destroyed for their immorality. It would appear that for the Bible, Paradise can only be found in a rural setting, outside of the city. It is hardly surprising, therefore, that none of the forefathers chose to live in cities, and instead were tent dwellers. As Dr. Leon Kass writes in his book The Beginning of Wisdom, “the city [for the Bible] is rooted in fear, greed, pride, violence, and the desire for domination” (p. 147). Kass’s claim, and many others like it, draw from one story in the Bible more than others— the story of the Tower of Babel.

Towards the beginning of Genesis, the reader is told of a unified world, filled with cosmopolitan inhabitants who seek to build a city, construct a fortified tower, and “make a name” for themselves (Genesis 11:4). In response, God thwarts their plans and expresses disappointment at their behavior. God then “scatter[s] them from there over the face of the whole earth,” and as a result “they [stop] building the city” (Genesis 11:8). This story is often used as a cautionary tale of the city’s dangers. Opponents of urban life frequently argue that the Bible is making the implicit claim that the city necessarily aims to glorify man. For them, all cities are like Babel, challenging the power of God and seeking self-sufficiency. Instead, they argue, God can be found in a quiet pastoral life, far from the vicissitudes of the city.

Yet, this is only one way to read the narrative of the Tower of Babel. As God conveys his anger at the inhabitants of Babel, the Bible leaves the reader uncertain as to what provokes God’s anger. The reader is only told that God is concerned that if they continue along this path “nothing that they may propose to do will be out of their reach” (Genesis 11:6). Perhaps it is not the construction of a city per se that draws God’s ire, but rather what the people intend to do with the city. Perhaps the Bible is not trying to encourage the reader to reject urban life, but rather attempting to teach the value of cities when they are properly constructed, and their dangers when they are misused. This reading comes into clearer relief when we consider the origins of another famous biblical city, Jerusalem.

The origins of Jerusalem and the Tower of Babel are parallel in many ways. Both arise when there is unity, either in the land or the world at large. The Tower is built as the world begins to gather from scattered settlements and becomes unified around a central city (Genesis 11:1-2). David builds Jerusalem as he unites his kingdom and attempts to unify his nation around a central city (2 Samuel 5). Both Jerusalem and the Tower are built around a central tower or fortress; for Jerusalem, the fortress will later be known as the City of David (2 Samuel 5:7), and for Babel, the Tower of Babel (Genesis 11:4,9). Furthermore, just as the people of Babel build the Tower to make a name for themselves, the fortress David captures is named “the City of David,” advancing David’s name in Israel (Genesis 11:4; 2 Samuel 5:9).

Yet, the story of Jerusalem diverges from that of the Tower of Babel. In the subsequent chapters after the capture of the fort at Jerusalem, one would expect David to consolidate power around his capital. Yet, his primary preoccupation appears to be ensuring that Jerusalem is the earthly dwelling place of God. First, David brings the ark of the covenant to Jerusalem (2 Samuel 6). As he does so, he “dance[s] before the Lord with all his might” (2 Samuel 6:14), in a demonstration that even as he is a king over Israel, he is first and foremost a servant of God. Immediately following this event, David seeks to build the Temple in his new capital, a dream his son Solomon will bring to fruition (2 Samuel 7, 1 Kings 5-8). Perhaps most strikingly, although David does not build the Temple, archaeological evidence shows that when David builds his own palace, he builds it lower down on the mountain, leaving space for the future Temple to crown the city. This public display of deference to God in the capital city of a burgeoning nation is not an error, but a deliberate action on David’s part.

David recognized, as did Aristotle, that the city is a place where human virtue and excellence are uniquely poised to flourish. He also recognized the opportunity that urban life provides to glorify God in the world. Precisely the pretense of self-sufficiency that the city allows, forms the space for man to realize that he is reliant on God for more than just bread and water. City dwellers may not depend on God to send rain in the proper time, but they do rely on God to help protect them from their enemies and to help culture, art, finances, and education blossom. These realms, which supplant mere survival and necessity with human flourishing, are areas where it is often difficult to acknowledge God’s presence in human affairs. Yet, when a city’s inhabitants do manage to recognize the link between the prosperity of the city and God, they are declaring to the world that God’s power spans from the minute to the great, from the farm to the metropolis.

This highlights another strength, as well as a potential weakness of the city. A city that grows in fame and renown and yet manages to acknowledge that its glory belongs to God, exalts God more profoundly, and certainly more publicly, than a village. Similarly, a rich and powerful city denying God makes a more impactful statement than a rural village doing so. Cities, with all their stature in human life, serve as megaphones that can either amplify the word of God or, on the other extreme, intensify the basest human desires of greed, pride, and corruption.

David’s choice to make the capture and inauguration of Jerusalem about God, rather than himself, begins the process of constructing a city that recognizes its reliance on God in the midst of its success. This process is continued with the reign of Solomon, the golden age of ancient Israel, that sees the arrival of dignitaries from around the world and the construction of the magnificent Temple (2 Kings 5-10). The Temple is the epicenter of the city, much like the Tower of Babel. The Temple too, through the medium of sacrifices and prayer, is a “tower that reaches to heaven” (Genesis 11:4). Yet, unlike the Tower, the Temple attempts to glorify God in the world. By inviting dignitaries and royalty to Jerusalem, Solomon weds political power and religious aspiration, ensuring that the city of Jerusalem exists not simply to make a name for Israel, but to exalt the name of God in the world.

The builders and inhabitants of Jerusalem took the opportunity provided by city life, the prominence and the prosperity it provides, and used it to bring a religious discourse, and indeed monotheism into the world. In this sense, Jerusalem serves as the corrective for the Tower of Babel. Just as the prideful misuse of the city leads to the dispersion of people throughout the earth, the proper city, one dedicated to the service of God, leads to the unity of people on earth. As the prophet Isaiah predicts, Jerusalem will become an international capital of prayer, as people are gathered from all corners of the earth. This unity counteracts the egoistic objectives of the Tower of Babel, demonstrating that the city can recognize and extoll God’s primacy and escape the punishment of dispersion throughout the earth. In this reading, the story of Babel is not meant to caution against the building of cities. Cities, aiming at human goods and garnering influence and acclaim, are best fitted to bring God into the world.

Today, all cities, given their finite resources and space, compel us to make conscious, value-driven decisions about the placement of parks, libraries, houses of worship, and other institutions. The challenge of cities being deluded by illusions of self-sufficiency has never been greater than today. This can present an obstacle, but also an opportunity for moral and spiritual aspiration. We must recognize, as David did, that cities are not just places to make us a name, like the Tower of Babel, but, like Jerusalem, places to exalt the name of God.

Instead of grappling with the difficulties of modern life by escaping to small rural communities, we should build cities populated with people who share a devotion to God and a common conception of the good. In these cities, we could instantiate our values in the buildings we construct and the lives we lead. Together, let us aspire for the day we may justly declare, as King David once did, “The Lord is great and much acclaimed in the city of our God… joy of all the earth” (Psalms 48:1).