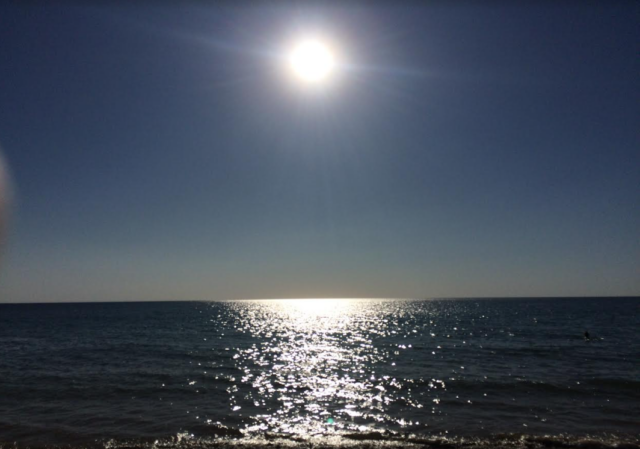 We walked with my father, on a dry road, strewn with rocks. It was the late afternoon. A teenager rode his bicycle past us and in a kind of quantum moment, as he propelled ahead of us, his cry accosted us from the back. “Kike.” And having no knowledge of that word, its weight and limitless power, I knew instinctually that my life had now changed. He sped ahead although he faced little danger from a frail Ashkenazi engineer and a four-year-old boy. My father let go of my hand while continuing to hold it. He picked up a rock and hurled it at the coward, missing his target.

The sand in Jurmala is soft and endless. It is easier to grasp the concept of infinity if you have walked from Dzintari to Meluzhi. With pine trees to your left and the immanent expanse of sea on your right. Reaching your destination, happily exhausted you look at the coast continuing ahead and realize you had not arrived anywhere. There used to be so many Jews visiting during the summer that, instead of Latvian or Russian, you would hear Yiddish spread like fairy dust along the warm commercial avenue.

We rented a room with three beds, in one of the furthest villages. Jurmala is very long and thin, like Chile. It is a series of hamlets, each one centering its existence on a railway stop. It is married to the sea and endowed with an innate vacation quality, a bit like Cape Cod. The house we stayed in for two or three summers was built by Vigor. It was solid and taciturn like the person who erected it. I would climb with his son on the water tower and we would talk and survey the dachas let by entrepreneurial Latvians to Jewish families who were about to jump into the Atlantic.

My grandfather kindly alerted his Ukrainian cousin to our whereabouts and she brought her family who rented an adjacent room. We would walk to the sea, stopping in a café near the train station to eat ice cream from metal, slightly elevated serving trays. The cousin doted on her grandson, pushing the boundaries set and perpetually moved further toward idol worship by Jewish grandparents. She would immerse the spoon into the fragrant, vanilla mass, put it into her mouth to warm it and then feed it to her six-year-old cherub.

The other room was rented to my father’s friend. He was a dentist, with a large, confident belly and a lot of money. In Riga, they had a private house, an unheard-of extravagance. Their son Pasha taught me to breakdance. He would place a Modern Talking record on the player, and move his light body on the floor to the beguiling sounds of the West.

Vigor had a wife —who would sometimes disappear with other men into the badly illuminated Latvian night after countryside dances. There were two dogs. The first dog, Rambo, was a boisterous and not very smart German shepherd, tied up on a long leash. And the second, Bestia, a cacophony of matted fur, depressed after she accidentally laid on her puppies in her sleep, ending their short lives. Vigor was always working, in contrast to the people around him who hastened to do that as little as possible.

The water was always cold. When my father’s friend would throw myself and his son into the waves, we would feign incredulity and scream, “We will complain to Gorbachev!” But Gorbachev was too busy then, desperately trying to save something irredeemable. It would get deep pretty quickly but then you would reach the first sandbar and stand, with only your heels immersed, like Jesus. Then you would swim ahead and land on the second sandbar. You would stand once again, and look back at the beach, more distant and impressionistic. You could swim forward but few of us ever did, because from there the sea would continue on unabated toward eternity or Sweden, whichever came first.

The Kafkaesque rhythm of Eastern European antisemitism could be felt through the sticky little utterances sprinkled in playgrounds and school hallways. “If there is no water in the house, then the kike drank it. If there is, the kike peed there.” Even armed with a degree in philosophy and buoyed by Kierkegaard and Levinas, that circular logic was hard to refute.

“Pa-pam, pa-pam, pa-pam, pa-pam.” There was jazz every half hour, and during rush hour every fifteen minutes, when the long electric trains would bring vacationers from Riga and sound out a familiar cadence. The cars’ inverted wheels rolling along solid, silver-tinged rails, set upon wooden beams and brownish rocks. The fleeting, sweet sound of summer and the inevitable reunion with real life.

We would often walk along the main street lined with cafes and impoverished Vietnamese students selling electronic watches. There was music in the newer, privatized restaurants and empty shelves everywhere else, save for the gargantuan jars of canned tomatoes adding insult to injury.

Vigor’s son sold bunches of dill, which he grew himself, at the little farmer’s market. We would say hello to him and sometimes buy one.

The forests teemed with blueberries and their fairy tale scent. “Yes, you will go!” my father sternly commanded when I resisted the boring sojourns to pick them, which could last hours. So much effort for a fruit that could never compete with the ethereal taste of the strawberry.

But always, the sea was given its due and we paid homage multiple times a day. Walking along the dry road, strewn with rocks, past the train station, built during a more prosperous time. Until the pines, thin and radiant, with light among them.