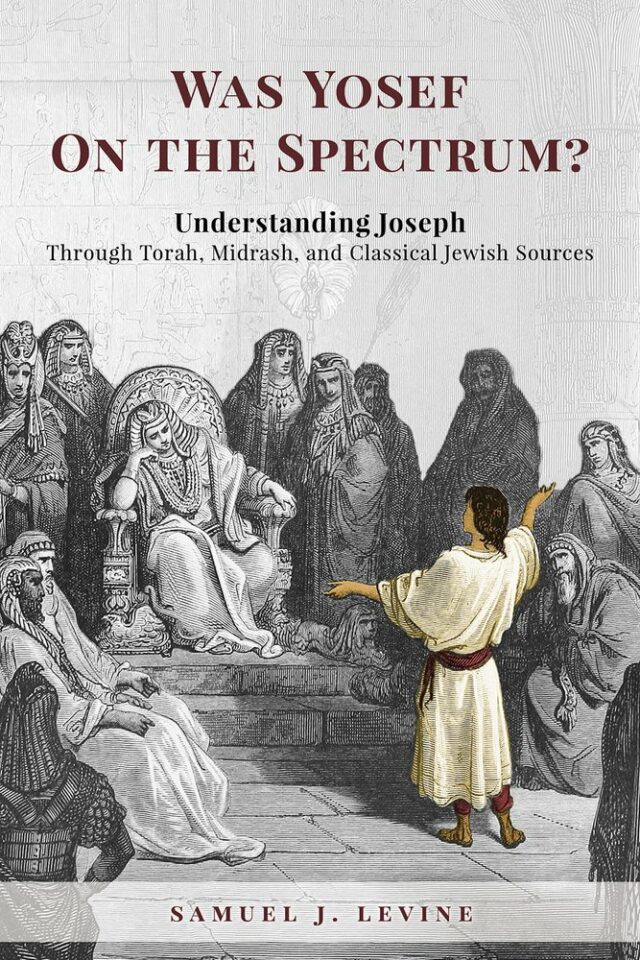 Most readers of Samuel J. Levine’s Was Yosef on the Spectrum? Understanding Joseph Through Torah, Midrash, and Classical Jewish Sources will likely focus their energies on the question in the book’s title. Is it appropriate to attribute autism to one of our biblical heroes? Are the author’s arguments for such a thesis persuasive? Yet it would be a shame if that issue exhausted discussion about a volume which deals with many significant interpretative questions regarding the Joseph narrative. Levine, a professor of Law and Director of the Jewish Law Institute at the Touro Law Center, has done an impressive amount of research, combing the traditional commentaries and midrashim for relevant material, and reading the verses quite carefully. Following up on his footnotes provides ample reward, particularly since Levine addresses the later chapters in Genesis which many Humash students do not get to. After evaluating the central thesis, this review will then explore some important ideas in Levine’s work.

In support of his essential thesis, Levine identifies many potential traits of Joseph that cohere with a person on the autism spectrum. Among other traits, Joseph feels a special connection with animals, engages in self-stimulating physical gestures, has trouble reading the emotions of others, does not foresee the consequences of his actions, and combines impressive cognitive abilities with immaturity. Furthermore, Potiphar’s wife identifies him as an easy mark. These commonalities notwithstanding, while the list does describe people on the autism spectrum, it also describes many people to whom we would not attribute a particular condition. Many human beings struggle to anticipate consequences, and combine deep intelligence with lack of understanding. Thus, it is hard to say that we have a strong case for locating Joseph on the spectrum.

Moreover, a number of the items listed above depend upon a particular interpretation of the relevant verses. To be fair, Levine always honestly outlines various possibilities even when only one supports his thesis. For example, some commentators on 37:2 (Seforno, Abravanel) explain that Joseph instructed his brothers in how to care for the sheep, but that is not the only reading of “hayah ro’eh et ehav ba-tzon.” Joseph may simply have been an equal partner with his brothers in the realm of shepherding. According to the latter interpretation, there is no evidence that Joseph had a particular affinity for animals. Similarly, while Levine interprets the midrash about Joseph’s ma’aseh na’arut as his engaging in self-stimulating physical gestures, Rashi understands that Joseph is arrogantly playing with his hair and admiring his own good looks. Thus, the list of traits identifying Joseph on the autism spectrum is itself debatable.

I imagine that Levine is partially motivated by a desire to generate greater respect for autistic people and their potential accomplishments, a worthy goal. However, his approach may come at a cost. We often grant significant leeway to autistic individuals and alleviate them of full moral responsibility for their behavior. Doing so for Joseph destroys crucial elements of the story. Joseph makes youthful errors born of pride, yet he heroically resists the wife of Potiphar, and eventually forgives his brothers for their heinous crime despite his temptation and ability to extract revenge. Does this account work if we excuse Joseph from full moral responsibility? Perhaps it does if we view Joseph as on the extremely high functioning end of the autism spectrum; but I have my doubts.

Still, even those who do not accept the main thesis will benefit from a careful reading of Levine’s work. The following four issues appear in the book in the context of the possibility that Joseph was somewhere on the spectrum. I am purposely divorcing them from that context to illustrate the value of Levine’s analysis beyond his central theme. His wide reading and effective citation of textually sensitive commentaries on the Joseph saga enhanced this reader’s understanding of the story. Levine locates interpretive gems in the traditional commentators which illuminate aspects of the Joseph narrative.

Many note the intensive mourning Jacob does for Joseph with six different verbs conveying his grief:

And Jacob rent his garments, and put sackcloth upon his loins, and mourned for his son many days. And all his sons and all his daughters rose up to comfort him; but he refused to be comforted; and he said: ‘Nay, but I will go down to the grave to my son mourning.’ And his father wept for him. (Genesis 37:34-35)

Why does Jacob express the most profound mourning of any biblical character? Obviously, losing a child, especially one’s favorite son, causes immense pain. Yet Levine notes that Radak adds that Jacob blamed himself for the tragedy; after all, Jacob had sent his son to check on the brothers in Shekhem. Perhaps the only thing more horrible than a parent losing a child is the parent feeling responsible for that child’s early demise.

We now jump ahead several chapters to Joseph appearing before Pharaoh. Some erroneously think that tyrants and dictators can rely on their intimidating power to do whatever they please, but history indicates otherwise: even absolute monarchs worry about open or hidden resistance as they employ various methods of propaganda and persuasion to convince the populace to support their decisions. The process of Pharaoh’s appointment of Joseph follows this trend. Pharaoh wants to appoint Joseph second-in-command in Egypt, but he foresees opposition, either due to jealousy against a newcomer or ethnic hatred of an outsider. Thus, it is not an accident that Pharaoh turns to his servants to proclaim Joseph’s greatness (41:38). He intends to persuade them to go along with his decision. Furthermore, as Abravanel explains, Pharaoh gives Joseph both an Egyptian name and an Egyptian wife in order to facilitate his integration into Egyptian nobility (Abravanel, Jerusalem 5744, Genesis p. 396).

After the familial reconciliation, Joseph instructs his brothers to inform Pharaoh that they tend cattle so that he will grant them dwelling in the land of Goshen, but he does not tell his brothers to mention Goshen (46:33). Apparently, the plan is for Pharaoh to arrive at that conclusion without feeling that the brothers decided independently where they will live; the king might otherwise resent the brothers for selecting real estate for themselves. Yet when carrying out the plan, they do explicitly state their desire to live in Goshen (47:4). Abravanel begins his explanation by noting that the verb “Va-yomru” appears twice consecutively (47:3-4) despite the fact that the brothers speak to Pharoah each time. One explanation for this biblical phenomenon is that a character waits for a response that does not come, and then chooses to speak again. After the brothers declared that they are shepherds, they waited for Pharaoh to articulate the Goshen idea. Only after the monarch responded with silence did they begin anew and ask for Goshen (Abravanel, Genesis p. 422).

Our final example comes from one of the concluding chapters of Genesis. Afraid that his days are numbered, Jacob asks Joseph to swear that he will bury him in Canaan, the burial place of his ancestors, not in Egypt. When Joseph assures his father that he intends to carry out this directive, Jacob asks again for an oath, and only then does Joseph swear (47:29-31). Ramban explains that Jacob certainly trusted his cherished son and Joseph’s word alone sufficed without a formal oath. However, Jacob was concerned that the Egyptians would resist the idea and anticipated that an oath would make them appreciate Joseph’s need to carry out Jacob’s wishes. Indeed, Pharaoh makes reference to the oath when granting Joseph permission to bury his father in Canaan (50:6).

Levine uses these four scenes to advance his essential argument. Joseph’s struggle to understand his father’s request indicates the communication difficulties that plague the autistic. Pharaoh has to work extremely hard to convince his followers to accept Joseph given the latter’s unusual condition. Jacob feels extra responsible for Joseph’s fate since he failed to appreciate how his son’s autism might render him unsuitable for the mission of checking on his brothers.  In contrast to the above, Joseph shows greater wisdom than his brothers regarding the request to settle in Goshen. Despite their limitations, autistic individuals often have areas of life in which they succeed admirably. For Joseph, negotiating with the Egyptian monarch was one such area.

At the same time, as noted, we can explain these scenes quite well without the autism theme. Jacob’s excessive grief, Pharaoh’s need to convince his underlings, strategizing to enable settlement in Goshen, and the debate about the need for an oath regarding location of burial all make sense and generate insight even if Joseph is not on the spectrum. Appreciating the wisdom of Radak, Abravanel, Ramban, and others allows those resistant to the main argument to benefit significantly from a careful reading of this volume. We are indebted to Levine both for his painstaking reading of the last fourteen chapters of Genesis and for his prodding us to rethink our attitude to the autistic.