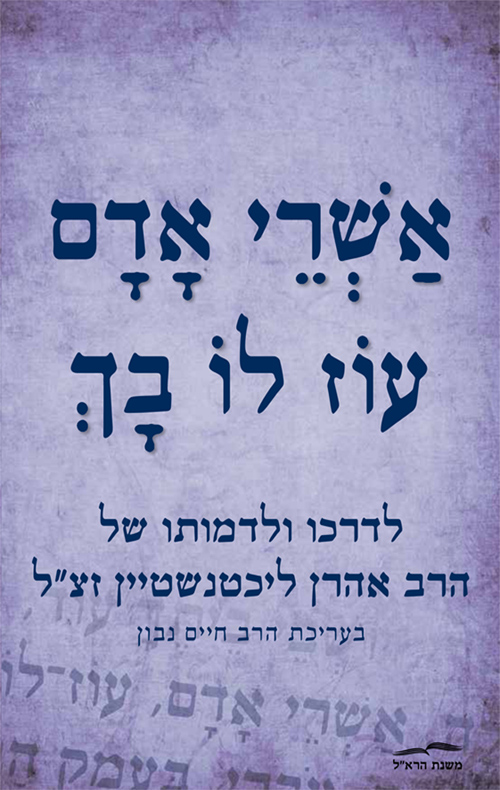 In reading the book Ashrei Adam Oz Lo Bakh: Reflections on Rabbi Aharon Lichtenstein and his Legacy[1] (Chaim Navon, ed., Yediot Books, 2018)—a Hebrew work of reflections from a number of Rav Lichtenstein’s students—a profound sense of sadness overcame me. Sadness that Rav Lichtenstein is no longer around to guide us with his irreplaceable combination of religious fervor and passionate humanism. Sadness that the younger generation of students will never have the opportunity to study with a true Torah scholar who, in addition to having the whole corpus of Talmudic knowledge literally at his fingertips, was a paradigm of virtue and kindness. As Rabbi Eli Lipschitz writes in his contribution, “Sometimes I hear people talk about what a giant of Torah so and so is and I think to myself, how unfortunate it is that they have never really saw what true greatness in Torah is [referring to Rav Lichtenstein]” (200). This reminds me of how my teacher and friend Professor Shimon Glick, also a student of Rav Lichtenstein, was saddened by the fact that Rav Lichtenstein’s accomplishments and piety made him acutely aware of how far he was from that ideal.

Rav Lichtenstein was very demanding of his students on both an intellectual and spiritual level. His classes were uniformly given on an advanced level, and he rarely simplified the abstract halakhic principles he was elucidating in order for his less learned audience to better follow his classes. In his contribution, Rav Amnon Bazak comments that the only thing that Rav Lichtenstein hated was laziness (185). in this vein, Rabbi Chaim Navon writes, “It is difficult to fathom how conscious he was of time, he arranged his schedule not in hours but in minutes or perhaps in seconds. … [H]is children commented that they never saw him rest” (213). When someone needed to meet him urgently, he told them to come to the Yeshiva on Tuesday at lunch time, as he usually ate for seven minutes and was available to talk. Given this intensity of spirit and demanding expectations, Rav Bazak rightly asks: how did Rav Lichtenstein attract thousands of students? He gives three perceptive answers, the first being his personal example: Rav Lichtenstein demanded no less and even more of himself.

Second, Rav Lichtenstein was not only demanding, but he also encouraged students to excel and gave them the skills necessary to succeed in their learning. Third, Rav Yehuda Amital, the founding Rosh Yeshiva of Yeshivat Har Etzion, who later asked Rav Lichtenstein to join him as co-Rosh Yeshiva, gave an educational message that was almost a polar opposite from that of Rav Lichtenstein—“education that emphasizes excellence and elitism can easily lead to frustration”—and this balance between the two was a secret to the Yeshiva’s success (191).

Many  contributors comment on Rav Lichtenstein’s profound sense of humility. He himself wrote, “I am a simple man, there a million like me,” but his daughter Esti Rosenberg, Rosh Beit Midrash of Migdal Oz, counters, “Abba, you exaggerated, maybe there are dozens like you, definitely not millions, but that is truly how he felt” (328). His whole life, Rav Lichtenstein refused to travel business class on his frequent trips to America; he consented only when he got older and it became necessary for health reasons. Even so, when he gave his ticket to the flight attendant, he felt it necessary to inform her that they forced him to fly business (322).

Rav Yuval Sherlo once wrote that Rav Lichtenstein was the only person he was afraid of, and others have shared similar sentiments. His student Aviad Friedman writes in his essay in the book, “I have spoken with many wealthy people and Presidents and Prime Ministers, but I have never felt as much fear as when speaking to Rav Lichtenstein” (283). Nevertheless, in reading the book, one gets the distinct sense that for many of his students this fear somehow turned into love for their teacher. His son, Rav Mosheh Lichtenstein, a current Rosh Yeshiva of Har Etzion, writes that what he learned most about his father during the shivah was the deep and intense relationship he had with many of his students. One of the students even told him “that I felt like I have lost a father when Rav Lichtenstein died because my children have felt as if they have lost a grandfather” (119). Aviad Friedman ends his article by writing, “once I went to speak to the Rav when he was older to ask him a personal question. The Rav heard my concerns and my weeping and didn’t say a word but simply hugged me as the tears were flowing” (288). Indeed, a common theme expressed eloquently in the book is that for many, the fear turned to love as the years passed. Another student recounts that when his daughter was ill, Rav Lichtenstein did everything in his power to comfort and help him through the difficult time, telling him “I have nothing important to do today” except to meet with you and your wife; this student writes: “since the Rav has died I feel truly like an orphan, it is difficult to come to grips with the loss” (307). The common theme here is that many students felt as if they had personally lost a father. Rav Lichtenstein’s wife, Dr. Tovah Lichtenstein, suggests that perhaps from the perspective of her husband towards the end of his life, “the Rabbi-student relationship became more of a father-older child relationship” (82).

In addition to his love of Torah, Rav Lichtenstein was a religious humanist with a great love of humanity. His daughter Esti Rosenberg notes “that moral questions such as how to relate to the stranger and the other concerned him greatly” (328). But not only did he think and write about morality and empathy, his life was a model of lovingkindness and compassion. Aviad Friedman (286) writes how Rav Lichtenstein chastised him for not assuring that his outsourced workers were paid on time even though the company had no legal responsibility. And Michael Eisenberg relates that he refused to even consider firing maintenance and technical staff of the Yeshiva in times of budgetary stress (211). All this was in addition to his personal charitable contributions, attested to by his daughter who states, “at times it was difficult to live in our house in Jerusalem or talk to him on the phone because at all hours of the day people would knock on the door” (328). A few of the contributors in the volume cite the eulogy Rav Yechezkel Abramansky gave for Rav Isser Zalman Meltzer, a European and later Israeli rosh yeshiva: “‘even if he didn’t know one drop of Torah he would still have been the most beautiful man in Jerusalem.’ And so too Rabbi Lichtenstein” (212).

Rav Haim Sabato writes movingly of his last meeting with Rav Lichtenstein: “I came close to his bed, he saw me and embraced me warmly and instructed me on the importance of protecting the State of Israel, on the complexities of Israeli society, on the value of our Yeshivot and how we should instruct our students in the importance of loving one’s fellow man, in sensitivity, empathy and the complexity of the world… [C]ontinue to teach’ he implored me ‘don’t stop, continue to strive for greatness in Torah, faith and loving your fellow man’” (295).

The book is mostly written by the students of Rav Lichtenstein who followed in his footsteps to become outstanding Torah scholars. I think a companion volume written by non-rabbinical figures would also be enlightening so that one could see how Rav Lichtenstein impacted their lives.

But as it stands, the book still sums up Rav Lichtenstein’s legacy well. His wife, Dr. Tovah Lichtenstein, writes that “from his youth his parents instilled in him their hope that he will be a Torah scholar, a renaissance man who will make a major impact on the people of Israel” (78). As this beautiful volume attests to on every page lovingly written by his students, it appears that their aspirations have certainly been fulfilled.

It is fitting that Rav Lichtenstein’s Yartzheit falls this year on the day that daf yomi is starting to learn Tractate Yoma. Rav Lichtenstein had a particular fondness for the intricate halakhic Talmudic discussions of the Yom Kippur service in the Temple. But further, the Tractate tells the story of how the Kohen Gadol was the representative of the Jewish people as he encountered the presence of God in the Holy of Holies on the holiest day of the year. For thousands of his students, Rav Lichtenstein was their loving guide: on account of his saintly behavior and dazzling teachings; on how to reach beyond their mundane material existence to encounter and experience the awesome holiness of God and his Torah. What better encapsulates this perspective than the verse that forms the title of the collection: “How fortunate is the one whose strength is in You” (Psalms 84:6).

[1] The title means, “How fortunate is the one whose strength is in You,” which is a quote from Psalms 84:6.