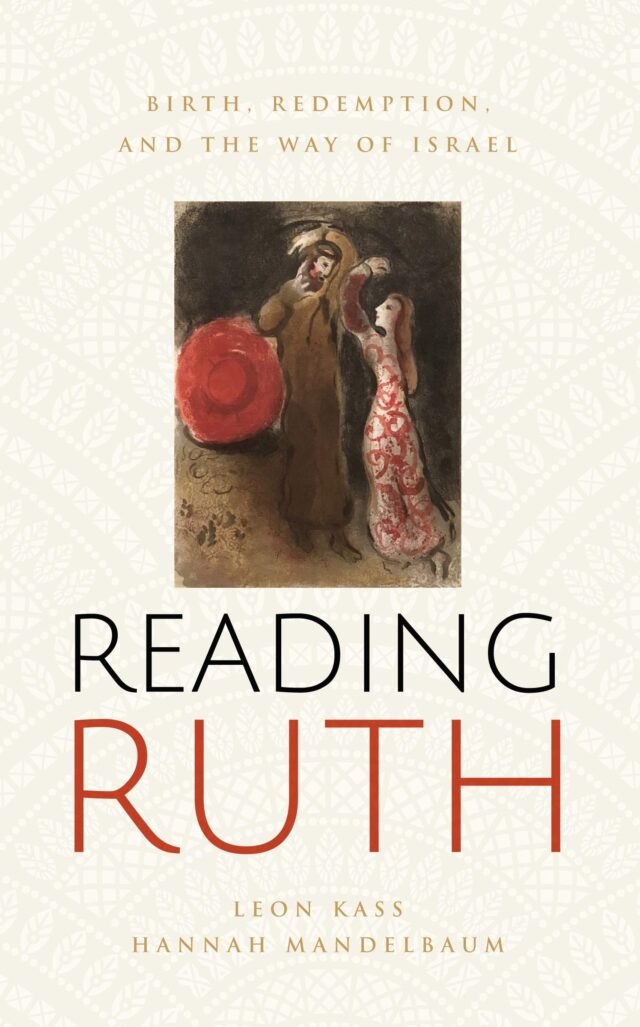 Review of Reading Ruth: Birth, Redemption, and the Way of Israel by Leon Kass and Hannah Mandelbaum (Paul Dry Books, 2021)

The book of Ruth begins with the attempt to overcome loss. After suffering through the death of her husband and her sons, Naomi brushes herself off and attempts to rebuild her life back in her hometown of Bethlehem. Surprised by Ruth, her former and ever-loyal daughter-in-law, Naomi ends up not only restored but also having ensured the continued spiritual flourishing of her people.

Leon Kass, an emeritus professor of social thought at the University of Chicago and the author of The Beginning of Wisdom: Reading Genesis and Founding God’s Nation: Reading Exodus, has also found comfort in the story of Ruth after experiencing upheaval in his life. Following the loss of his wife of 54 years, Amy Apfel Kass, Kass learned the book of Ruth with his granddaughter Hannah Mandelbaum, a Jerusalem-based college student. Reading Ruth, a result of their havruta, documents the wisdom and insights of Ruth’s teachings that they learned together.

A brief volume (the book runs 125 pages, including endnotes), the authors present their own commentary largely without the assistance of classical Jewish interpreters and without utilizing recent scholarship on Ruth. (The few secondary sources cited on occasion are a decades-old essay by Maurice Samuel, another by Cynthia Ozick, a Mosaic article on Ruth, and Yael Ziegler’s Ruth: From Alienation to Monarchy, which the authors state they came across late in the process of their writing.) As they write in the introduction, when pressed by their publisher to imagine their ideal reader, they picture him or her as “whether young or old a lover of stories with a taste for character and artistry; a serious but open-minded seeker of wisdom regarding enduring human concerns,” but not necessarily familiar with prior knowledge of the text, knowledge of biblical scholarship, or religious commitment.

It would not be a surprise then for long-time readers of Ruth and its commentaries throughout the ages―including recent years’ close literary readings offered by Jonathan Grossman, Yair Zakovitch, Tamara Cohn Eskenazi and Tikva Frymer-Kensky, and Orit Avnery―to already be familiar with much of the content in this new commentary. But Kass and Mandelbaum’s passion for the material, often felicitous phrasing, and the accessibility of their work to a wider range of readers than a typical scholarly commentary make the volume a worthwhile read independent of one’s previous study of Ruth.

By way of example of the work’s style, when Naomi encourages Ruth and Naomi’s other daughter-in-law, Orpah, to find menuhah following the deaths of their respective husbands (1:9), the word is brilliantly rendered “marital-maternal relief from restlessness.” The problematic nature of Elimelekh, Naomi’s husband, leading his family out of Israel and into the fields of Moab during a famine―much discussed in classical rabbinic texts (which go unmentioned)―is framed by the authors thusly:

… a certain man – an ‘ish, a man of standing – decided to leave the country. Why should we be interested in him, and what, we wonder, are we to make of his singularity? Should we regard him as a maverick and outlier in Israel, or as a paradigm of Israelite initiative and enterprise – or, alternatively, of Israelite waywardness?

Ruth’s famous pledge of allegiance to Naomi (“Wherever thou goest, I will go…” (1:16)) is meticulously analyzed for its nuance, with the authors’ keen eyes noting that:

…when Ruth solemnly invokes (for the first time) the Lord God of Israel (not the ‘elohim of Moab), it is not in expression of reverence or in prayer for a blessing. She invokes Him only to call down His punishment on her – misery like yours, Naomi, and more so – should she allow anything but death to separate them.

In their rendering of the scene in chapter two in which Ruth finds herself in Boaz’s field and the latter’s employee mentions to him that Ruth is “the Moabite maiden who came back with Naomi from the fields of Moab,” (2:6) the authors suggest―contra the usual understanding of this as a snide, racial dismissal of a foreigner by the field overseer―that he is in fact helpfully and sheepishly hinting to his boss that this indigent young woman could sure use some help from, say, a rich relative of Naomi, should he happen to know anyone who fits that description (*cough* *cough*). Following the same thread, the authors―in alignment (intentional or not) with recent revisionist understandings of Boaz as less classic hero and more hesitant, wavering potential-suitor―note that Boaz introduces himself to Ruth without stating his name or identifying himself as Naomi’s kinsman, unsure as to the propriety of initiating a courtship.

Besides the often breathtaking prose, one of the great strengths of Reading Ruth is the skillfulness with which it offers its literary analysis. The many guiding words that appear in clusters in the short narrative (eg. shuv [return] in chapter one and shakhav [lie down] in chapter three) are gleaned for insights into the characters’ psychological and spiritual motivations, as are the biblical author’s callbacks to unusual words used earlier in the tale. Examples of the latter phenomenon include Ruth being told by Boaz to “cling” to his workers (2:8) (meant to signal a reward for Ruth’s having clung to Naomi when prospects for neither seemed high (1:14)) and Ruth reporting to Naomi that Boaz sent her back from the threshing floor with food lest she return “empty” to her mother-in-law (3:17) (meant to convey that fortunes have turned since Naomi first stepped foot back in Bethlehem after God had “emptied” her (1:21)).

The authors adeptly articulate the genealogical and behavioral subtext that constitutes the key to understanding the Book of Ruth’s most crucial scene, the one taking place at the threshing floor in chapter three: namely that Ruth, descended from Moab―and Boaz, descended from Judah’s son Peretz―are each products of earlier biblical stories of night-time seduction. So too they elaborate on the symbolic nature of the character and place names throughout the book: Bethlehem, Kass and Mandelbaum explain, can mean “House of Bread,” while Ploni Almoni, they note, can be rendered as “‘Joe Blow,’ ‘John Doe,’ or ‘Mac.’”

Unsurprising to readers of Kass’s earlier works on the Bible, Reading Ruth’s greatest asset is its aim to stake moral claims about how to live life well and to convey the wisdom the Hebrew Bible has gifted the world. Noting the aforementioned Ploni’s reluctance to marry the foreigner Ruth, the authors note:

…before we rush to convict him [for this poor decision], we should consider whether we – average people ourselves – would have chosen differently: how many of us would gladly marry, only out of putative moral responsibility, the foreign-born widowed wife (from an enemy nation) of a deceased second cousin whom we hadn’t seen in ten years, to sire and rear a son that will be his, not ours?

…it is love and loyal devotion, and not merely moral duty, that govern Boaz’s final pledge to raise up Mahlon’s name upon his inheritance and to make sure that his name is not cut off from among his people. The deepest love is not a painful lack seeking satisfaction for oneself, but a bountiful overflow seeking the good for one’s beloved, in generative acts both large and small.

Reading Ruth makes for perfect Shavuot night reading (and you won’t need to stay up all night to finish it). It succinctly but sumptuously conveys the pathos, profundity, and artistry of the pastoral tale that has inspired countless kindnesses for generations. Fitting for a book read on the holiday of the giving of the Torah, a time in which countless intergenerational havrutot have studied God’s word long into the night, the book of Ruth seeks nothing less ambitious than to capture the essence of our people’s national story and the keys to its eventual restoration in its Land. As the authors―one from his residence in the United States, the other, his grandaughter, from hers in Israel―remind us:

…in Israel, begetting and belonging are of the essence. Members of the community should not disappear without a trace and land should not be permanently alienated. The community should avoid an enduring division between the landed and the non-landed. Every family should be rooted in the land, able to sustain its life, generation after generation, in service to the Lord.