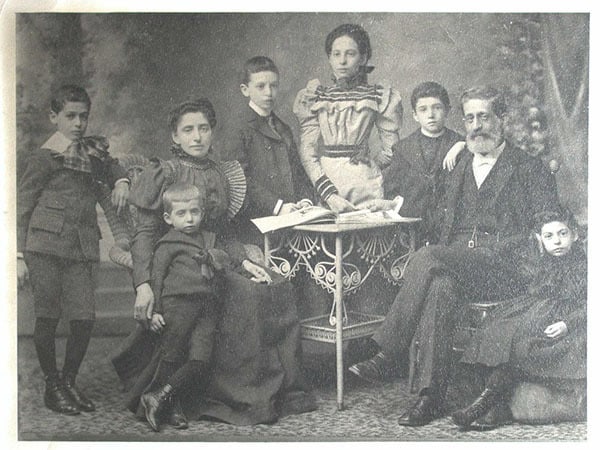 In the late nineteenth century, Rabbi Henry W. Schneeberger (1848-1916) of Baltimore emerged as a major advocate of Eastern European Jewish immigrants, encouraging his German Jewish congregants to offer financial aid and educational support to Russian émigrés. He carried great influence as rabbi at Chizuk Amuno Congregation in Baltimore and as an officer of the nascent Orthodox Union. Born in New York but entrenched within America’s immigrant Jewish community, Schneeberger was determined to show that European Jews could acculturate to and appreciate American sensibilities. This message was particularly important in the wake of a major cholera epidemic in Europe (to which he alluded to in his remarks) that worried U.S. officials and New World newcomers with families and strong ties to the Continent. This Thanksgiving sermon, delivered before Jews of varied origins on November 29, 1911, reflected that commitment to the Jewish-American synthesis. The editors acknowledge our thanks to Chizuk Amuno Congregation Archives in Baltimore, MD, for granting permission to transcribe and publish this text, and to Dr. Gil Graff for providing the original handwritten version of this sermon.

In response to a call of the President [William Taft] of our land and the Governor [Austin Lane Crothers] of our state, we assemble here to-day to render thanks to the Giver of all good for His countless blessings showered upon us during the past year. O! What a glorious spectacle worthy of the most eloquent orator, does this day present! Nearly 80 millions of people ceasing from their daily toil gathering in their respective places of worship and around the family table, as a sign of their thankfulness for the bounteous harvest which in one shape or another they have garnered. Read, my friends, the history of the nations from the beginning of time to the present and you will see but one nation—the nation chosen of God—who set apart a day for national thanksgiving. This truly American holiday—this day which draws all the people, this great country from icy Maine to genial Florida, from the wide Atlantic to where the mild Pacific sweeps, into one united family, is but the celebration of the Jewish festival of Tabernacles. In Palestine this festival was celebrated at the close of the harvest feast. The people dwelt in booths and mirth, merriment, and good cheer prevailed the tribes from afar and near assembled in Jerusalem, and the whole nation felt by this reunion, that they were one in heart and one in spirit.

Thanksgiving in this country is of New England origin. The Puritans were disciples of the Old Testament: The Decalogue was their constitution, the Bible their favorite book, the very charter of their liberties; nowhere was the Sabbath kept more strictly than among them, and by their stern virtues they developed those marvelous powers which have enabled them to wring from a sterile land the victories of wealth and fortune, and has made New England the very bone and sinew of the land. The spirit that moved the Puritans was drawn from the Jewish fount and now as New England’s influence has spread over our broad land, Thanksgiving has become, as our own beautiful feast, a time of merriment and good cheer, a time for a reunion of families, a day, when the East and West, North and South, gather in the Temple and their homes to offer up the sacrifice of charity, benevolence, and good will. To me it seems as if there were no nobler characteristics of true manhood than that of giving thanks. Each one of us is the recipient of so many favors every day and every hour, that we have come to regard them as deserts, such a day as this will serve a valuable purpose. For if thinking men and women will reflect on the reasons why they should be thankful, it will do much to give us corrector and truer ideas of life.

Cheerfully and with alacrity we have left our daily vocations to devote this day of thanks to [the] Almighty for the numerous mercies He has bestowed upon us during the past year. His merciful dispensation has been showered over us. Corrupt must be the heart and torpid the mind which does not discover His boundless mercy. Man, the most richly endowed of all living creatures; man, to whose comforts all creation contributes, should shrink in horror from the thought of ingratitude. It is therefore necessary that certain periods be set apart from worldly pursuits in order that we may step aside from the vortex of fashion and folly surging around us and reflect upon these momentous matters, concerning our God, our soul and salvation that we may raise our hearts in gratitude to our Father in Heaven, the donor of all good. We give utterance to our heart’s emotion for the special blessing of peace and national prosperity. Our harvests were plentiful. We were particularly blessed with good health, when dreaded epidemics threatened to invade our shores. Reviewing the history of our American nation, beholding therein, as in Israel of old, the interposition of God’s special Providence, brightly reflected, we must likewise exclaim with David, how also “He hath not done so to any other nation” (Psalms 147:20). Calling to mind American History, what do we behold? We see the hand of the most High planting a small vine of human freedom on American soil. To us in the language of Scripture, “prepared a room for it to take deep root and fill the land and the boughs thereof grew like goodly cedars” (cf. Psalms 80:10-11).

As Israelites, we feel grateful to be recognized as citizens of a country and a part of its inhabitants, where we are not only tolerated but where we possess equal rights and privileges and where we can practice our religious observances without hindrance and molestation. In no other land under the sun can Israel fulfill its glorious mission, to be a ray of light unto the nations, as in this country (cf. Isaiah 42:6). Let us be loyal to our faith and we will be loyal to our country. The observant followers of the religion of our fathers will gain for us the respect and good will of our fellow citizens, whereas the lawbreakers and the Jew who ridicules and trifles with time-honored traditions and the vital principles of Judaism must be satisfied, to receive the contempt and reproach of all right-minded men. Let us, as American Israelites, transmit to our descendants, the precious heirloom of our fathers, pure and unsullied, and so educate our children, that they will honor their faith and grow up as law-abiding citizens of our beloved country.

A Yahrzeit & A Pandemic: Thoughts On R. Amital In The Age of Covid

My Last Conversation with Rav Amital