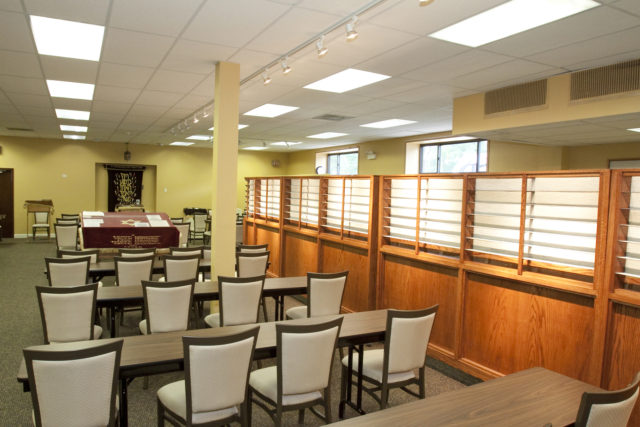 Editors’ Introduction: The past year has been full of conversations, statements, and publications surrounding the topic of women’s roles in Orthodox Judaism. Among the many issues underlying this important and continued dialogue is how women experience their religious lives, and what will enable them to foster and sustain a relationship with God. The Lehrhaus therefore presents this three-part symposium. We thank Tova Warburg Sinensky for spearheading and serving as guest editor for this project.

The messages my Modern Orthodox community has been sending me—as a woman in my thirties, a wife, and mother of three kids under the age of eight—have been disappointing, to say the least.

We—mothers of young children, many of whom work full-time outside the home—are encouraged to cook multi-course Shabbat and holiday meals for new parents and those who are ill, and host large meals for new families who recently joined the community. We’re also expected to actively volunteer time and donate money to our shuls and day schools. These are valuable hesed opportunities, but they fall largely on us women. (When was the last time a man signed up to prepare baby meals?)

And what about our spiritual lives? Davening even once a day? Attending shul on Shabbat (and not just showing up for the kiddush at the end)? Participating in shiurim on a regular basis or having a weekly havruta? The message I hear is that such activities are just not important during this stage of life; we’ll have the opportunity to attend plenty of shiurim when the children are older. Doing so now is nice, of course—no one would challenge that—but such spiritual engagement is considered a luxury.

The problem is that without engaging in the spiritual—the learning, the davening, communicating with Hashem and developing a close relationship with Him—all of these other things (the hesed, the cooking, the Sisterhood board meetings) begin to feel like a drag. They’re divorced from meaning. Another demand on top of an already overflowing schedule.

And if you’re anything like me, you might find yourself waking up one morning after years of nursing, pumping, and middle-of-the-night wakings, teething, and bed-wetting, and realizing that Hashem and I—we aren’t really on speaking terms. I’m not angry at Hashem. (How could I be? He’s blessed me with so much goodness!) But He just doesn’t factor into my life in as meaningful a way as He used to.

After all, we don’t talk much.

A decade (or longer!) is a long time to spend bereft of spirituality. As I begin to contemplate the next stage—a future in which I will no longer be bogged down by strollers and sippy cups and diapers and bibs—I think about all I have lost during this time, from a spiritual perspective. The spiritual person I was in seminary or as a newlywed? I hardly recognize her.

There are ways in which our community can do better to encourage—and support—mothers of young children in their desire for continued personal and spiritual growth while also nourishing their young and growing families.

For now, I’ve had to struggle to discover my own solutions, and find myself frustrated by the lack of communal support.

Since my youngest daughter turned a year old, I have been actively working to pick up the pieces of my shattered spirituality.

It isn’t easy. I daven most mornings, but there are times I realize as I plop into bed after a dizzyingly busy day that it just didn’t happen. I downloaded Torah podcasts to listen to during my commute in place of my go-to podcasts—but, I admit, they haven’t captured my attention in the same way. I try to attend shiurim, but after a full day of work and then the frenzied dinner-bath-book-bed routine, I’m simply too exhausted to leave the house.

My husband—who is an equal partner and does the majority of the daycare drop-offs and pick-ups and grocery shopping—has been very supportive. Together, we have come up with our own solutions, often at a significant financial (and emotional) cost.

For example, I added up the cost of childcare for our one-year-old so both my husband and I could daven in shul on Rosh Hashanah and Yom Kippur. It was $400 (above the cost of seats and yom tov meals and other hag-related costs). That’s a significant sum for many of us. Next year, my husband might attend the early morning minyan, but that would mean stepping down from davening for the amud at one of the later minyanim. As it is, everyone else gets to hear my husband’s beautiful davening except for me.

On Shabbat, my husband attends the hashkamah minyan. While he’s there, I get all three kids fed and dressed. He brings our one-year-old to a weekly haburah (if she behaves), or they hang out in the baby room while I daven upstairs in the main minyan (the other two attend youth groups).

This schedule makes it possible for me to daven, but it also means I can never get to shul on time—leaving me feeling that my prayer is devalued as compared to my husband’s, at least on a communal level. The issues—that groups start too late and are only for children ages three and older—aren’t ones we can resolve on our own beyond hiring a nanny every Shabbat, which is not a budget-friendly solution.

Communities and organizations, like people, send messages—oftentimes subconsciously—through their actions and more significantly, inactions. So even if community leaders say that they value something, examining how budgets are spent and which actions are taken are more telling in understanding their true priorities. If our shuls were really concerned with the spiritual growth of parents of young children, these are but some of the changes they can implement:

My local rabbi and other synagogue leaders don’t necessarily disagree with me. However, childcare is expensive. Worse, they tell me that I’m the lone voice raising these issues—they don’t get these requests from other women. Implicit in this response is that there is something wrong with my desire to attend shul on Shabbat, to participate in a shiur. (Is it so wrong to look to my shul as a place to help me reconnect with Hashem and nourish my soul?)

But I am confident that I am not alone. My friends tell me that they, too, feel that they don’t have a place in the synagogue, that it isn’t the spiritual refuge they seek. But they don’t approach the Rabbi because they’ve given up. This is the way things are. They’re more accepting of the status quo than I am. So what if they don’t daven on a regular basis anymore? Does it matter? The message we are getting is that it doesn’t.

Much has been written about surviving the physical difficulties that come along with the blessing of raising small children—the sleepless nights, the terrible twos and more terrible threes, potty training, and the like. But the spiritual challenges that many parents of young children face often go unacknowledged or are minimized. Mothers of young children, in particular, can spend a decade or more in what Adina Kastner termed “structureless spirituality.”

Our community can—and must—do more to support women’s spiritual growth and connectedness—especially when their children are still in diapers. I fear that if changes aren’t made, women will no longer see the synagogue as a place of spiritual sustenance. Who’s to say that the young mom who never makes it to shul will start attending frequently when her children do, eventually, grow up?

She will likely find other avenues for personal growth, or worse yet, view the shul as a place that satisfies the needs of every member of her family except her own. This will come at a cost, not only to her personally, and to her family, but to the community at large, as well.