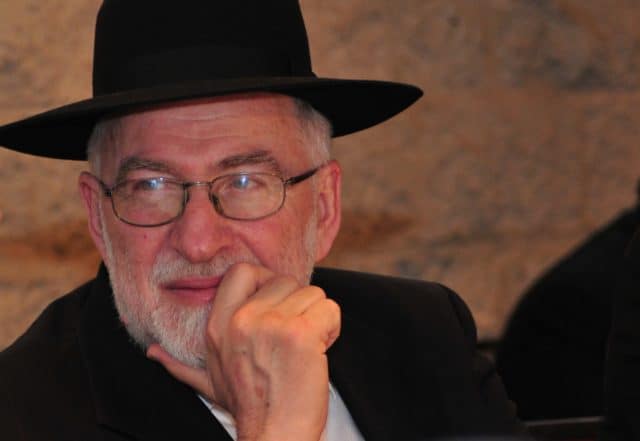 In May 2011, Rabbi Hershel Schachter defended himself against criticism levied in an Orthodox Union quarterly. In the previous issue of the OU magazine, Rabbi Schachter had contributed an essay in a symposium on mesorah, the chain of rabbinic transmission that sits at the core of modern-day Orthodox faith. For him, especially, mesorah is most sacred, steered by unimpeachably righteous scholars and helped along by divine intervention. Both are needed to preserve the tradition’s “purity.” No one should have been much surprised by Rabbi Schachter’s article. He had articulated similar points of view in prior writings. Still, one letter-writer, Rabbi Yitzchak Blau, on the grounds of providing “added nuance,” offered a few critiques for the OU’s readership to consider.

Rabbi Schachter’s view on rabbinic decision making is important, given his station in the Modern Orthodox orbit. He is, by almost all accounts, the leading rabbinic figure at Yeshiva University, within the Rabbinical Council of America, and associated with the Orthodox Union.

His authority cannot be measured by usual ecclesiastical metrics. Unlike his teacher, Rabbi Joseph B. Soloveitchik, the Rav, Rabbi Schachter does not hold any official position within these organizations that would register him with this sort of rabbinic power. At YU, Rabbi Schachter is a ranking Rosh Kollel—and one of the first appointments in a long line of Rav-taught roshei yeshiva—but his signature does not appear on the ordination certificates. Nor is he chairman of the RCA’s Halacha Committee.

Rabbi Schachter’s unparalleled and unofficial rank is supported by his erudition, scholarship, charisma, and the respect accorded to him, in the main, by several generations of Yeshiva University students.

All this makes serious study of Rabbi Schachter’s mesorah theology that much more compelling. For him, the role of rabbinic authority is not just a matter of keeping social order or maintaining uniformity within Orthodox religious behavior. It’s a theology.

A Theology of Rabbinic Authority

God protects the transmission of His legislation, no matter how far it progresses beyond the pages of the Talmud. Long ago, Nahmanides (Deuteronomy 17:11) affirmed this notion. But it goes much farther for Rabbi Schachter. That halakhah has journeyed a sometimes-sinuous path is untroubling. God, Rabbi Schachter would have it, navigated halakhic interpretation that way, beyond the limited comprehension of people.

God utilized these deserving men to calibrate the twists and turns that textual study alone cannot anticipate. For Rambam, that might have meant dispatching with scores of rulings previously issued by prior generations in the Gaonic period. Rabbi Yitzhak Elhahan’s voluminous writings are filled with pathbreaking decisions informing religious observance in Eretz Yisrael and regarding agunot. Of course, the Rav and Reb Moshe instructed their students and followers on a variety of humras and kulas.

At the end of the day, these individuals and countless others became more than just the sum total of their acumen and training, which are important, too. They learned to read between-the-lines, endowed with a rabbinic intuition. This non-textual, almost-magical sixth sense inspired them to issue courageous decisions to innovate and change, and made clear when to hold a more conservative line.

Rabbi Schachter’s students are very familiar with his halakhic theology. We learned more and more about it in his daily lectures, particularly in his Thursday morning discourses on the weekly Torah portion. We encountered it in the stories he tells, and while studying his novellae and reading his various treatments on the Rav.

Now, two recently published authorized books based on Rabbi Schachter’s teachings provide a portal of entry for a broader audience. The first work is a collection of Rabbi Schachter’s thoughts on the weekly Torah portion, aptly titled Rav Schachter on the Parsha. The second is Divrei Sofrim, an eight-chapter primer on the Oral Law, its reception, and bindingness (there was a somewhat slighter earlier edition published in 2013 and a final edition is set to appear in 2018).

In this second work, Rabbi Schachter offers the following sentiment: “There is a letter of the law and there is the spirit of the law. To discern the spirit of the law, one must be expert in the law itself. One who has a sense of the ‘big picture’ can perceive what direction is pleasing to God” (62). From the other perspective, God ensures that there are big-picture-sensing scholars to move rabbinic tradition forward.

The “spirit of the law” rhetoric had been converted from its Pauline origins to an Orthodox Jewish tagline back in nineteenth century Lithuania to indicate the importance of humra, stringency, as that community encountered the modern world. Unlike in those times, Rabbi Schachter gives it the heft of a theological backing.

Rabbi Schachter’s point of view is far from understudied. Rachel Adler, Adam Ferziger, Lawrence Kaplan, David Landes, and Alan Yuter have all written or presented papers on various aspects of Rabbi Schachter’s interpretation of Jewish law and authority. In particular, Yuter and Landes rightly seized upon the importance of “intuition” in Rabbi Schachter’s conception of rabbinic decision making.

To my knowledge, though, Rabbi Schachter did not respond to any of these evaluations. Rabbi Blau’s 2011 critique, however, elicited a response, one that offered a good description of Rabbi Schachter’s notion of rabbinic intuition. One of Rabbi Blau’s criticisms harped on Rabbi Schachter’s interpretation of two of the twentieth century’s leading Orthodox rabbinic luminaries. The latter argued that for Rabbi Avraham Yitzhak Kook and Rabbi Soloveitchik religious change could only be executed by those who display “only the purest of intentions.” No matter how cogent, no matter how urgent, any alteration to Jewish law required unquestionable commitment to the halakhic process—above all else.

Both Rav Kook and the Rav had indeed made that point, but in elaborating upon a specific tale in the Talmud. Rabbi Schachter’s interlocutor could not accept the broad application to every realm of halakhic decision making. More interesting, still, is that Rabbi Schachter would not consider any alternative:

Rabbi Blau is correct that the Rav and Rav Kook were speaking about a specific innovation, but his implication that other innovations do not require purity of heart is incorrect. People acquire attitudes from a wide variety of sources, many of them antithetical to Torah values. Rashi writes on Shemot 28:4: “And my heart leads me to understand.” In Yiddish folklore, they point out that this comment of Rashi is problematic. How is he allowed to follow the dictates of his heart?

In this instance, Rashi found his research inadequate to describe the apron worn by the high priest. Instead, Rashi relied on intuition (לבי אומר לי). He supposed that the garment was something like the kind adorned by French horsebacking noblewomen.

How could Rashi merely proffer a guess? The Yiddish adage and the nineteenth century scholar, Rabbi Yehiel Meir Lifschitz of Gustinin, offered the very same response. Rashi’s lifelong devotion to Torah permitted him to tap into some divine inspiration. Or, as I’ve heard Rabbi Schachter—who has used Rashi’s formulation in his own writing (see Bi-Ikvei Ha-Tzon, no. 4)—explain it on different occasions, there are some challenging questions that require “reading between-the-lines,” a skill mastered by only the most expert scholars.

The short-lived debate in the pages of OU’s Jewish Action betokens the central theme in Rabbi Schachter’s theology: halakhic intuition. For Rabbi Schachter, halakhic intuition is that God-given ability to read in-between-the-lines of the Talmud, or, as he once put it, to imagine the missing pieces of a halakhic jigsaw puzzle. Both metaphors arrive at the very same point: halakhic intuition is a quality borne out of the humble realization that no amount of Torah knowledge or rabbinic stature suffices to answer the most difficult, sometimes meta-halakhic questions. More important, perhaps, it’s a trait scaffolded by faith that God directs the course of halakhic transmission.

The Checkpoints of Tradition

Not everyone can be a checkpoint in the history of halakhah, the people Rabbi Schachter calls the ba’alei ha-mesorah. Much of it is God’s choosing. But, claims Rabbi Schachter, there is some human ingenuity involved.

How does someone become worthy? According to Rabbi Reuvain Grozovsky, his father-in-law, Rabbi Barukh Ber Lebowitz, liked to speak about Mesorat Avot and the scholars who, after apprenticing with a master teacher, knew best “how to ask a questions; how to offer solutions; and to confront cases of doubt (safek).” This is an education, contended Reb Barukh Ber, that defied the usual sort of genius training: “Torah, as they say, is acquired by the principles and methods of Torah, not with human logic.”

In other words, to rehearse the metaphors, they read between-the-lines, sorting and prioritizing passages of Talmud and its commentators; intuiting when to negate precedents and introduce new ideas; and whatever else might be needed to see the impossible-to-complete puzzle. The stuff that defies regular, discernible “logic.”

Rabbi Schachter has his favorite rabbinic adages, and Reb Barukh Ber’s is one of them. Of course, deep knowledge of halakhah and expert familiarity with an assortment of other realms is a must for deciding matters of Jewish law. More critical, still, Rabbi Schachter would have it, is knowing how to ask the tough questions.

Most important, though, is God. Once asked, however properly, He helps out with the answers. That’s Rabbi Schachter’s faith.