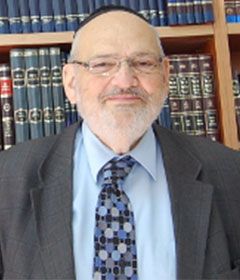 We experienced a great loss for the Jewish people on January 20 with the death of Rabbi Simcha Krauss at age 84.

The Krauss family fled Romania for America in 1948. His father, Rabbi Avraham David, was the Chief Rabbi of Sibiu, and then a community rabbi in Washington Heights. He was known for his efforts on behalf of agunot (women stuck in halakhic marriages) even when the family was en route to America.

Rabbi Simcha Krauss was ordained by Rabbi Yitzchok Hutner of Yeshiva Chaim Berlin; he was also a close student of Rabbi Joseph B. Soloveitchik. He served congregations in Utica, NY, St. Louis, MO, and was the Rabbi of the Young Israel of Hillcrest in Queens. He taught political science at St. Louis University and Utica College, and Talmud at Yeshiva University. After making aliyah in 2005 he taught at Yeshivat Eretz HaTzvi. Rabbi Krauss published articles in Hebrew and English in leading Torah journals.

I turned to Rabbi Krauss for advice and guidance on all four sections of the Shulhan Arukh and on personal matters.

Many stories will eventually be told about the bet din (rabbinic court) he founded in 2014 – when he was 77! – to help people around the globe cope with the systemic inequities in Jewish divorce law. While both parties have to agree to a get (writ of divorce), the requirement for the husband’s willingness is far more absolute. When a recalcitrant spouse holds up a get proceeding, they cause tremendous pain and suffering. This is the crux of the contemporary agunah crisis.

Rabbis historically have been able to solve many (but not all) problematic cases. We see this in their correspondence with each other and Rabbi Krauss’ halakhic methods were not new. One halakhic solution he employed is called kiddushei ta’ut. That is, a determination after extensive investigation that the marriage was contracted under mistaken assumptions or through an invalid ritual. Talmudic sources for this notion are few. But throughout the post-talmudic period rabbinic authorities expanded the potential application of the argument that “the marriage is void based on an error” (see for e.g. Iggerot Moshe Even Ha-Ezer 1:79-80 and 4:113). In some cases, Rabbi Krauss reached the same conclusion about the marriage when an officiant at the wedding made egregious errors or when the witnesses were invalid. In such cases, no halakhic marriage ever took effect, and therefore no get was needed.

Despite his strong desire to help agunot, he shied away from methods that would not have been widely accepted by other rabbis. One highly controversial approach is to retroactively annul a marriage on the basis of rabbinic authority. This goes back to the Mishnah (Gittin 4:1-2), to the time of Rabban Gamliel. The Gemara says kol de-mekadesh ada’ata de-rabanan mekadesh—when a man marries a woman he does so under the conditions laid down by the rabbis—va-afk’inhu rabanan le-kiddushin minei—and the rabbis can nullify his marriage. The basic concept, as Rashi explains in Yevamot (110a), is that when a couple marries kedat moshe ve-yisrael, what we mean is: according to Jewish law as determined by the rabbis. If the rabbis decide this marriage needs to be annulled, then they have the authority to do so. This leads to the same outcome as kiddushei ta’ut: a marriage never took place, so no get is required.

The Talmud records five cases of hafka’at kiddushin, some of which involve immoral behavior, like abuse, on the part of the husband. Some say that hafka’ah can only be used in those five cases (Responsa of Rashba 1:1185). Others maintain that we cannot use hafka’at kiddushin after the talmudic period (cf. Darkei Moshe Even Ha-Ezer 7:13 and Rema Even Ha-Ezer 28:21). In keeping with this precedent, Rabbi Krauss did not rely on this method.

A good example of Rabbi Krauss’ deference to other rabbis was that he abstained from using one truly innovative solution, despite having intellectual sympathies for the approach. Over half a century ago, Rabbi Yehiel Yaakov Weinberg, the last head of the Hildesheimer Rabbinical Seminary in Berlin, hesitantly considered, and ultimately withdrew from, the innovative solution of a get issued on behalf of the husband by the bet din (see Sridei Esh 3:25). A rabbinic court in Tzfat made use of this halakhic tool in 2014 – not without controversy – as a basis for ending a marriage. But Rabbi Krauss never did.

Unlike many rabbis who often keep their lenient rulings unpublished, Rabbi Krauss made his decisions publicly available, including on the internet. In addition to helping women, Rabbi Krauss wanted to sensitize the public to their pain and to promote Torah learning about the issues. He envisioned a more transparent rabbinate.

When I told Rabbi Krauss about a series of classes I was giving to college students on Jewish family law, he pushed me to include sources that didn’t fit the standard party line of today’s rabbinate about birth control: “I know you know the Yam Shel Shlomo and Bet Shmuel on that, why don’t you teach them?” Rabbi Krauss was as much about elevating rabbinic discourse and behavior as he was about freeing women.

It wasn’t just through his bet din that Rabbi Krauss showed unusual fearlessness and courage. When I was a young rabbi in Ann Arbor, Rabbi Krauss helped me clear up a misunderstanding with a senior rabbinic judge in Jerusalem. Rabbi Krauss went several times, with and without appointments, to advocate on my behalf. “It is not right for a dayan (judge) to express a view on this without speaking to you, but you’re there in Michigan and I’m here, so I’ll speak for you,” he told me. In the end, Rabbi Krauss sent me a written letter from the rabbinic judge supporting me. I’m certain many others felt this kind of tangible support from Rabbi Krauss. He didn’t just say that he supported you. He acted on it, even when he had difficulty walking.

When other rabbis attacked him for his views – usually with misleading or false information about his bet din – he responded forcefully but with respect. It was particularly absurd that the harsh criticism of Rabbi Krauss was largely amplified by writers knowledgeable about Jewish law generally, but who had no expertise in these specific halakhot and have not served in communal leadership roles. His detractors were overwhelmingly in America rather than Israel, perhaps because in Israel the religious community worries less about institutional or denominational loyalty and has greater respect for Torah scholarship.

Rabbi Krauss always centered the conversation back to Torah and Halakhah, and insisted that people need rabbis who have courage, rather than rabbinic self-importance: “You can hurt me, you can insult me. But at the end of the day, this is not about me,” he told reporters. “We’re fighting for these women. And if we win, the whole community wins. And if we lose… more is lost than we can ever know.” Rabbi Krauss represented a rabbinic culture that cared about people as much as it cared about Torah.

I will also miss his dry sense of humor. On one visit to Jerusalem our plan to get together shifted because he was in the hospital. He told me what room he was in. When I said that I didn’t want to disturb him, he replied, “A disturbance? Where I come from it’s called bikkur holim (visiting the sick).”

May his students continue his legacy of infectious enthusiasm for sophisticated Torah learning and of doing what’s right, even when it is hard.