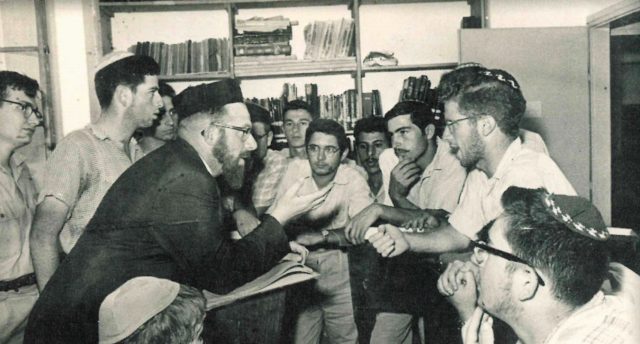 On Yom Ha’atzmaut 1991, the State of Israel awarded the prestigious Israel Prize to the hesder yeshivot. Selected for their “special contribution to society and the state,” the hesder yeshivot promoted traditional Torah study accompanied by army service. The person selected to represent the hesder movement was Rav Chaim Goldvicht, the Rosh Yeshiva of Yeshivat Kerem B’Yavneh.

KBY was the first hesder yeshiva, founded in 1954 by World Mizrachi and Bnei Akiva. Now linked to army service; at that time, however, these Religious Zionist institutions desired a yeshiva that reflected their unique ideologies—the military component was added several years later. Mizrachi tapped Rabbi Goldvicht to serve as KBY’s founding rabbinic head. Back in 1991, Rabbi Goldvicht participated in several interviews in the Israeli press, expressing the hesder yeshiva ideology and the point of view of Religious Zionism.

Nonetheless, the choice of Rabbi Goldvicht to represent the hesder yeshivot movement did not pass without criticism. One writer complained that Yeshivat Hadarom and its rosh yeshiva, Rabbi Zvi Yehuda Meltzer would have been a worthier representative. To this writer, Meir Hovav, Yeshivat Hadarom should have been credited with the idea of merging yeshiva and army service, and therefore Rabbi Meltzer was a better representative than Rabbi Goldvicht in receiving the Israel Prize.

Given his background, Rabbi Goldvicht was a curious symbol of Religious Zionism. He was a close follower of the Hazon Ish and a proud graduate of the Lithuanian-style yeshivot which often denounced Zionism.

In a certain way, this contradiction between Rabbi Goldvicht’s character—which was deeply rooted in the Haredi society—and his rabbinic station at KBY—where he played a significant role in the history of Religious Zionism—explains a lot. His ability to adjust to the political reality and to the actual needs of his students enabled him to succeed in his complex role.

Born in 1924, Rabbi Goldvicht grew up in Jerusalem, learned in Yeshivat Etz Chaim under the tutelage of Rav Isser Zalman Meltzer—the father of Rav Zvi Yehuda Meltzer of Yeshivat Hadarom. He maintained a close relationship to Rav Yitzhak Ze’ev Soloveitchik, the Brisker Rav. After he got married, he moved to learn in Yeshivat Slobodka in Bnei Brak. In that Haredi environment, Rabbi Goldvicht was mentored by the Hazon Ish, Rabbi Avraham Yeshayah Karelitz, the peerless leader of Israel’s so-called Ultra-Orthodox community.

Owing to his Haredi training, Rabbi Goldvicht was not the first choice of KBY’s founders. The heads of Bnei Akiva tasked with identifying a rosh yeshiva searched for a scholar and teacher whose views matched their Religious Zionism. However, no one agreed to take the job. Among the names mentioned were Rabbi Moshe Zvi Neria and Rabbi Shaul Yisraeli. Both men turned down KBY and Bnei Akiva, content in their rabbinic roles in Kfar Haroeh.

Rabbi Haim Drukman claimed that several candidates declined because they deemed KBY was too far away from the central Israeli cities and religious communities. KBY’s location was important to its founders. Based on Rav Avraham Yitzhak Kook’s teachings, they wanted to create a yeshiva in the very spot that Rabbi Yohanan ben Zakkai founded his school directly after the destruction of the Second Temple.

KBY’s difficulty to find an “appropriate” rosh yeshiva betokened part of the reasons for establishing such a yeshiva. The lack of rabbinic leadership within the Religious Zionist enclave encouraged leaders to get involved in the creation of the new yeshiva that would train a new generation of rabbis. Some secular leaders were also sympathetic to this cause. For example, Menachem Ussishkin, the head of Jewish National Fund, helped purchase the land for the yeshiva during the early stages of planning and described his wish that KBY would foster new leaders to compete with Haredi rabbis.

In 1956, Rabbi Goldvicht outlined his vision for KBY. He called for a Lithuanian, Talmud-centered yeshiva surrounded by an environment of Religious Zionism. He expressed a positive attitude toward Bnei Akiva and was aware of the nature and culture of his students. But he insisted that this world remain outside the walls of KBY’s study halls and its curriculum. In this sanctuary, the KBY students were meant to learn Torah the same way as their counterparts in “Slobodka, Telshe, and Bnei Brak.”

In response, World Mizrachi wrote to Rabbi Goldvicht in harsh tones. Its leaders were furious that Rabbi Goldvicht, so they alleged, deemphasized the organization’s role in KBY’s founding. They accused the rosh yeshiva of ignoring the “spiritual roots” of the yeshiva and its founders. Rabbi Goldvicht dashed off a letter back, expressing his deep appreciation to Mizrachi, acknowledging its leaders’ important role in the yeshiva and as the “absolute owners” of KBY. As it turned out, this was just the first of several clashes around this argument about the nature of the new yeshiva.

In the earliest years, Rabbi Goldvicht’s vision and cultural cues clashed with his students. At KBY, young pupils dressed in shorts and sandals, far from the more conservative and typical outfit of Lithuanian yeshiva students. KBY students also maintained their relationships with their peers outside of yeshiva, including the girls they had met and mingled with at Bnei Akiva. Rabbi Goldvicht, on the other hand, kept his traditional rabbinic dress and spoke in the Ashkenazic-styled Hebrew pronunciation used in the Haredi yeshivot, which was sometimes hard for his students to follow. However, these differences usually did not prevent Rabbi Goldvicht and his students from developing close relationships.

But Rabbi Goldvicht’s troubles with the founders persisted. Bnei Akiva and the World Mizrachi demanded to make changes in the yeshiva. For example, they insisted that students should study a curriculum that espoused Religious Zionism. In 1955, Rabbi Drukman offered this idea in a Bnei Akiva journal. There, Rabbi Drukman wrote that “the Bnei Akiva yeshiva should create an original path to educate “pioneering scholars,” ones who were attuned to the needs of Religious Zionism.

In 1956, the national board of Bnei Akiva asked Rabbi Goldvicht to broaden the courses of study beyond Talmud, to spend more time in learning Tanakh and Mussar texts. Bnei Akiva also agitated for space and time for contemporary issues and debates relevant to Religious Zionism. Some Bnei Akiva leaders also conceded that perhaps they were too hasty to establish KBY before a clear decision was made about the way of learning in the new yeshiva.

The tensions continued. In 1959, Mizrachi urged Rabbi Goldvicht to expand KBY’s curriculum, and as a response he organized an educational program for KBY that included the views of Chabad and Rabbi Samson Raphael Hirsch. Not necessarily Zionistic, these texts nonetheless would expose KBY students to spirituality and modern Torah learning beyond the pages of the Talmud.

What is more, Rabbi Goldvicht also expressed a Haredi view that felt most comfortable separating Torah learning from the surrounding atmosphere and the identity of the students poring over those texts. To him, therefore, there ought not be a difference between Haredi and Religious Zionist yeshivot: both should strive to isolate themselves in a world of Torah apart from “distractions” of culture and politics. To some extent, the Bnei Akiva and Mizrachi founders yearned for a radical approach, at least by the views and standards of that time. They wished for an amalgam. To them Torah and culture should influence one another, and therefore the first official Religious Zionist yeshiva must be different from the standard Haredi yeshivot.

The image of Rav Goldvicht as a conservative element in KBY, fighting against the attempts to change the nature of the yeshiva. is unquestionably accurate. However, it is also an oversimplification of Rabbi Goldvicht’s legacy and character. Alongside the traditionalism, his pragmatism and devotion to students’ needs compelled him to innovate.

Two examples bear this out. Rabbi Goldvicht made space for Jewish thought classes, even if the allotment for these courses did not reach the expectations of KBY’s founders. He did this in response to students’ request to continue the type of learning they experienced in the Religious Zionist high schools. Rabbi Goldvicht recognized that his pupils took this area of study very seriously and encouraged them to develop their learning and analysis of Jewish thought.

The second point concerns army service. KBY was not originally intended to include and accommodate participation in the Israel Defense Forces. KBY students pleaded with the school’s leadership to find a way for them to participate in Torah study and defend their country. In turn, Rabbi Goldvicht complied with this and helped to organize a system that became the hallmark of hesder yeshivot. He took part in the discussions with the IDF about creating new arrangements for yeshiva students and shaped the policies and framework for all hesder yeshivot.

In time, Rabbi Goldvicht’s yeshiva created a deep change in the history of Religious Zionism. KBY and the other hesder yeshivot changed the level of observance of this community and the social status of rabbis in this religious sector of Israel. Keeping to the vision set forth by Mizrachi, KBY created a cadre of Religious Zionists rabbis to serve in their communities and in official rabbinate positions. All of this helped cultivate a newfound confidence among the Religious Zionists that extended to the army and the political realm, none of which could have been conceived in the 1950s.

Whether he was the ideal match for the hesder yeshiva movement and Religious Zionism might be debatable. In many respects, he was an outsider. However, due to his pragmatism and student-centered leadership, Rabbi Goldvicht played an important role in the Religious Zionist revolution. He was proud of his accomplishments and expressed as much when he received the 1991 Israel Prize on behalf of a religious movement he helped lead.