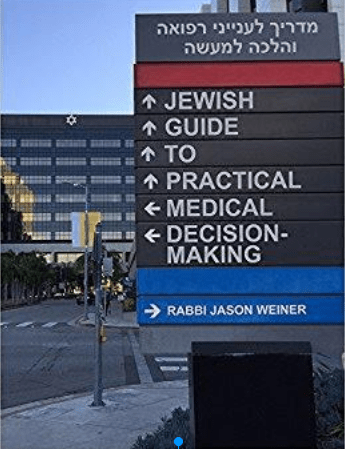 Rabbi Jason Weiner, a rabbi and bioethicist who serves as a synagogue rabbi, a posek, and as a consultant on a hospital ethics committee, has done a service to the halakhically observant Jewish community by writing a clear, modern, and compassionate book about dilemmas which patients, physicians, caregivers, and hospitals are likely to face. Approaching this book with my own particular biases, as an internist, bioethicist, and non-Orthodox but halakhically observant Jew, I would like to summarize its strengths and point out some areas where it might be made even stronger.

Not much guesswork is required to divine Rabbi Weiner’s approach. He says clearly in his introduction, “The purpose of this book is to increase Rabbinic involvement [in bioethical questions] and make it more efficient.” Rabbi Weiner’s goal is to enable Orthodox poskim to review areas of bioethics in which they are likely to be asked halakhic queries via summaries of those areas from a clinical (medical) and halakhic point of view. Part of his introduction is taken up by a clear and succinct summary of various philosophies of Halakhah which will not be unfamiliar to the interested learner; he contrasts precedent- and principle-based halakhic reasoning and the limitations of both, and gives credit to his halakhic forebears.

The health care rubrics which organize the book cover important areas, emphasizing inpatient (hospital) care: “Facilitating Shared Decision Making,” “How Much Treatment [about risk, incapacitated patients, palliative care],” “Prayer,” and “At the End of Life,” “After Death,” and ‘Reproductive Questions.” Each chapter is a judiciously written summary of salient issues with comprehensive, enlightening footnotes.

In general, this book is well worth purchasing and perusing for anyone interested in modern health care and Halakhah. But as relevant as the halakhic details (which I am not competent to question), are the implied messages sent by the selection of content and the manner of its presentation. The book is in English, including footnotes (compare with other halakhic texts for an Orthodox audience in which the content, or at least the footnotes, are in Hebrew). This makes the text admirably accessible — in fact, more accessible than the introduction contemplates. It’s very likely that the book will be read, appreciated, and used not just by rabbis and poskim, but by healthcare professionals, families, and patients as well.

The gap between the restricted use in the introduction and the likely broader use points to a tension in Halakhah that has existed as long as the Torah. The Torah itself says it is not in the the heavens, yet it has still been necessary to spill much ink to bring it down to earth. Such a tension between received wisdom and its use among the lay public is especially keenly felt in healthcare. Who is the source of authority in healthcare? The locus of authority has shifted. In an early, paternalistic age, the physician made the decision and told the patient to follow. Nowadays, patient autonomy reigns, and the physician follows the patient’s preferences. This view is oversimplified, of course. For the past few decades, the philosophy of shared decision-making has been ever more accepted (at least theoretically); patient and physician share the burdens of the decision, deliberating together to choose an option which meets the patient’s needs. Though this term is familiar to many sectors of medical practice, education, and research, it is not on the lips of many lay people outside of medicine. Yet it is certainly applicable to any halakhic text in this age of disseminated authority — all the more so to one which, while explicitly aimed at poskim, is implicitly available to a much wider audience.

It is paradoxical, then, that the book does not touch upon several areas which are topical ethical issues, which a sensitive Jewish posek might be able to shed light on and an informed patient might have questions about. While opioids (narcotics) are mentioned briefly in the context of pain management, the index (and, unless I am mistaken, the book has a whole) includes no mention of substance abuse, nor of sexually transmitted infections, sexual abuse, or intimate partner violence. Neither is there mention of LGBT health, let alone gender reassignment surgery. To the objection that these issues are not commonly found in Orthodox halakhic works, I respond that they should be — because these are human issues dealt with by patients and clinicians and subject to ethical queries. Any person to whom Halakhah is important, caught in a health care dilemma (or vice versa!), will be invested in what a knowledgeable authority has to say about such topics.

There is an even broader issue that goes unaddressed in this book: the effect of society and economy on the distribution of health care and health inequities. Liberal Jewish rabbis (for example, Rabbi Jill Jacobs) have written extensively about these issues. As the notion of social determinants of health, and institutional ethics, are starkly visible in an age where morals and politics are out of joint, the Jewish community would be well served to hear an Orthodox halakhic approach. These are not merely academic deliberations, but questions I face in multiple ethics consults: how do we justify and mitigate the difference in care given to wealthy patients from abroad and to poor black patients from across the street? Does a hospital have an obligation to pay its workers a living wage? Does it matter if the hospital is owned by Jews? Religious Jews? Are physicians obligated to deliver care they disagree with halakhically or morally? Is it the case that religious Jewish physicians can reassign (let us not say relegate or abandon) their patients to less observant, or non-Jewish, physicians when caught in such conflict?

I am asking for a broader ambit and a more inclusive reach (perhaps in a coming edition?) — but I could see Rabbi Weiner being up to the task. In his personal notes that accompany the more strictly halakhic discussion (including a sensitive essay at the end of the book), we are introduced to a rabbi, posek, and ethicist who has thought seriously about how individuals and families use Halakhah to navigate health’s inevitable tragedies. The entire world can be encompassed by the principles of ethics and the dalet amot of Halakhah, and the right view can do even more to bring those domains closer.