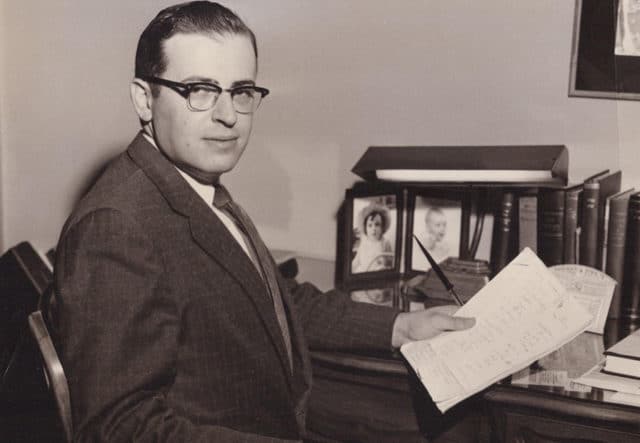 Editors’ Note:  This is one of three articles in a Lehrhaus series in honor of Rabbi Norman Lamm’s ninetieth birthday, observed on December 19, 2017. In addition to Lawrence Kobrin’s essay, we also invite you to read Tzvi Sinensky’s and Zev Eleff’s contributions.

Any reflection on the career of Rabbi Norman Lamm must start with his efforts in the 1960s to reinvigorate Orthodoxy on the Upper West Side and more generally in New York City. A proper account of that era and Rabbi Lamm’s efforts and achievements must start with an understanding of the condition of Orthodox Judaism in New York City when, in 1958, Rabbi Lamm returned to New York to become a rabbi at The Jewish Center. In that same year, he founded the journal Tradition.

In the 1960s, The Center struggled with an image of exclusiveness or worse, bar or bat mitzvahs were rare occasions, and there were few toddlers or grade school children. The earlier vibrancy of the community which had prompted Rabbi Leo Jung to attempt establishing a day school in the 1930s had waned. Rabbi Jung himself was still a leading figure in the Orthodox world, as one of the small group of rabbis who had rescued Orthodoxy in America in the pre-World War II world from disappearance. But he could not maintain the vigor physically or intellectually that had been his. More importantly, he could not fight the demography of the area. The area was no longer the attraction to Jews, and particularly to Orthodox Jews, that it had once been.

The leadership of The Center recognized the problem and sought by various means to attract a greater number of young people to The Center. Committees were formed, special home evenings were created, dues structures were altered, all with the hope that more young families would come to The Center and find an area where they would be comfortable. The image that The Center services projected, the “optics,” if you will, did not help. Coming into a synagogue where officers and rabbis wore striped trousers and top hats—as they still do—was not what young people wanted. Matched with the formalism—which Rabbi Lamm himself later termed the “sacred choreography”— was a “club-like” feeling (“you’re sitting in my seat”). As a result, young people looked elsewhere.

The West Side was poised for some kind of change. Rent control had kept most people locked in their apartments with their unimaginably favorable rents, but there was area deterioration. By way of example, the Hotel Endicott on Columbus and 81st Street, a structure dating back to the Civil War, had descended to single room occupancy where on the average a murder a month took place. It was thought simply dangerous to walk up Columbus Avenue. We joked that the new Police station on 82nd Street was to make response to the murders easier, but no one let their children walk to the bus past that block.

As a result, families started to move from the area, primarily to the upper East Side, but to the nearby suburbs as well. If one needed an emblem of this trend, one could point to Temple Israel, a Reform congregation with a huge structure on 91st Street and Broadway, which was sold to Young Israel at a bargain price.

As further indication of the demographic dismay facing the area, at one point, The Center explored the possibility of itself moving to a new location on the East Side. A later “fantasy” during Rabbi Lamm’s tenure involved a plan to have the City condemn a large super block which would house a relocated Yeshiva University and revitalized residential buildings, similar to what had been accomplished for Fordham University in the lower “60s” on the West Side. Neither plan came to anything, but they serve to demonstrate the feeling of many in the community of the downward trajectory of the area.

My credentials to recall this story are as follows. I was privileged to know Rabbi Lamm first as congregant when he served as assistant rabbi at Kehilath Jeshurun, then as congregant and officer at The Jewish Center to which he returned from Springfield, Massachusetts in 1958, and concurrently as the first Managing Editor of Tradition, the journal which he founded in 1958. The two achievements of the 1960s era of Rabbi Lamm were his rabbinate at The Jewish Center and his editorship of Tradition.

It was to a somewhat struggling institution that Rabbi Lamm arrived in 1958, serving as second in command to Rabbi Jung. He set about to do everything possible to revitalize the synagogue and make it attractive to young people and young families. Beyond establishing a variety of educational programs, he did so primarily by strong and popular Shabbat sermons. The sermons dealt with every contemporary topic imaginable and did so in a style drawing on midrash or halakhic sources which could be comprehended by all, even those with limited Jewish text background. This last point was crucial, as this was before the spread of day schools or the idea of a supplementary gap year program in Israel.

His sermons were well prepared and developed, up to preparation of the full written text. (I know because my parents badgered him each week for a copy of his sermon, the mass of which they retained and which I returned to Rabbi Lamm after my mother’s passing. The collection managed to fill in the set ultimately housed on YU’s Lamm Heritage website). The sermons covered events of the day, politics, social currents, challenges to Israel, challenges to religious observance, without limit. And they filled the synagogue week after week.

Rabbi Lamm’s rabbinate was not without its challenges and tensions, as Rabbi Jung sought to continue his full complement of rabbinic and pastoral activity, sometimes eclipsing the position of Rabbi Lamm. As a result, the lay officers, with the strong leadership of Max Stern, were sometimes called in to “mediate” sermon schedules or other such matters, something which neither they nor either of the two rabbis relished.

As a result of his rabbinate, however, by the time Rabbi Lamm left for Yeshiva University in 1976, The Center was on the way to becoming the central place which it now occupies in the rejuvenated—in all senses of the word—area of the Upper West Side. It was a remarkable achievement and must be appreciated in its historical context.

The Formation of Tradition

Rabbi Lamm’s other significant enterprise in that decade or two was Tradition. In the immediate postwar period, the academically educated and English-speaking Orthodox laymen did not have access to sophisticated journals and other sources, certainly not to the extent that they are available today. There were relatively few publications in English which would interest or sustain an educated reader who was interested in traditional Judaism and educated in secular skills.

It was in this context that Rabbi Lamm founded Tradition in 1958. He continued as its editor until 1962. It was not an easy task to find authors and articles who could be provocative and interesting without giving offense to one group or another. Circulation was always a struggle and financing—mostly from the Rabbinical Council of America—was not overly generous or sustained.

In starting the journal, Rabbi Lamm stated as its goal and function “to interpret the Tradition, the Word of God, the heritage of Torah and mitzvot in a manner and form that the modern, educated, thinking Jew can understand.” He wrote some of the important articles himself and got other known scholars and rabbis to contribute, as well. While the circulation was never vast, its influence as the first such regular publication cannot be underestimated.

All that we have today (and maybe there is even too much of it) can be traced to the idea of the journal and its acceptance by the community.

A reflection on Rabbi Lamm and the 1960s would not be complete if it did not include the fact that it was during that decade that Rabbi Lamm obtained his doctorate under Rabbi Dr. Joseph B. Soloveitchik’s supervision, and managed to serve as effective father to a wonderful family. His later accomplishments at Yeshiva University extended and expanded the achievements which had been seen during the decade of the 1960s.

May Hashem give him further years of health and nahat.