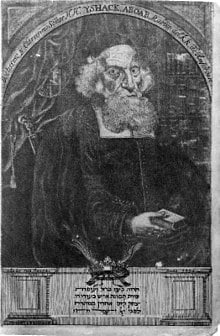 Rabbi Isaac Aboab da Fonseca, the first ordained rabbi to travel to the Americas, arrived in Recife, Brazil in 1642. The writings of Aboab from his time in Recife reflect the feelings of multitudes of rabbis who would serve in the New World after him. The poem and vidui (confession) which Aboab wrote while in Brazil (which can be found in Hakhmei Recife Ve-Amsterdam) convey the sentiment of the New World as a state of rabbinic exile. They also reflect the challenge of guiding a community entrenched in the economic opportunities offered in the Americas.

Aboab was born to a converso family in 1607 in the Portuguese town of Castro Daire. He came from a prominent rabbinic family, his great-grandfather and namesake being one of the last great rabbinic figures in Castile. His family settled in Amsterdam in 1613. There, Aboab rapidly rose in the rabbinic world. By twenty-one, he earned the title Hakham and was appointed to the chief rabbinical board of the community, which included the likes of Rabbis Saul Levi Mortera and Menasseh ben Israel.

Aboab’s rabbinic career brought him into the thick of various controversies, particularly those involving the former converso community in Amsterdam. Jews debated whether conversos would suffer eternal damnation for abandoning their faith, or whether repentance would save them from such a fate. Aboab voiced his opinion that conversos could redeem their souls by returning to Judaism, a position that put him at odds with Amsterdam’s chief Sefardic rabbi, Saul Levi Mortera.

Later in his career, Aboab became embroiled in one of early modern Jewry’s most famous controversies, joining fellow rabbis as one of the signatories on the edict excommunicating fellow Portuguese Jew, Barukh Spinoza.

What brought Aboab to travel to the New World is a matter of speculation. Perhaps as one of the youngest members of the Sefardic rabbinate of Amsterdam, Aboab drew the shortest straw. Alternatively, he may have carried with him a sense of idealism to help a fledgling Jewish community. Meyer Kayserling suggested that it was financial reasons that brought Aboab across the Atlantic, wishing to increase the meager salary he was earning in Amsterdam. The legend of the ‘Goldene Medinah’ seems to have much earlier origins than nineteenth century Europe. While Aboab certainly led an exciting rabbinic life in Europe, it is to his brief sojourn, 1642-1654, in the New World that we now turn.

Aboab lived peacefully in Recife for a short time. By 1646, the Dutch colony was under siege by the Portuguese. The Jews of Recife were terrified at the prospect of Portuguese conquest, knowing that Portuguese victory would also migrate the Inquisition to the New World and Brazil.

To respond to the threat, Rabbi Aboab composed a vidui, confessing what he believed to be the community’s sins, as well as beseeching God to spare them. In addition, Aboab composed a poem recounting the suffering of the siege, as well as the Jews’ rescue. These two documents are critical to not only understanding the specific events of the Portuguese threat, but also Aboab’s general perception of the Recife community and his rabbinical life in America.

Aboab’s poem is an account of the Portuguese siege. It is also a deeply personal reflection on what it meant for him to be sent as a rabbi to the far end of the world. He used biblical words with similar pronunciation and spelling to allude to Brazil, such as kur ha-barzel, the “melting pot,” which in the Torah refers to Egypt (Deuteronomy 4:20).

More importantly, however, for Aboab, Brazil represented a state of exile. In a number of places in his poem, Aboab alluded negatively to the remoteness of Brazil. At the very beginning of the poem, he depicted the Jewish residents of Brazil, himself included, as “Dwellers in the shadows of the universe.” Brazil was on the fringes, in the shadows of the known world, far from any major center of Jewish life. Later in the poem, he makes a personal statement, claiming that, “For my sin, I have been tossed to a faraway land.”

For Aboab, the Americas were in the shadows, and the only reason that could explain his presence there, was that it was a punishment of exile for sins he had committed. He was a young, rising star in the rabbinic world of Amsterdam, who was taken from the center of his community’s Jewish life and sent to the most remote place imaginable. Aboab’s sentiments reflect the feelings of later immigrant rabbis to the New World, whether from Germany, Lithuania, or Hungary. The Americas were far. The Americas were different. It was rabbinic exile.

Aside from his own personal feelings of exile, Aboab also implied in his writings what he felt were the shortcomings of his community. The years 1637-1644, the years in which many Sefardic Jews, including Aboab, arrived in Recife, were the peak of Dutch commercial activity in the region. The Jews became an integral part of commercial life in Recife, and in turn in Dutch world trade. According to Aboab, the Jews of Recife were too focused on their material success, which shifted their focus away from spiritual pursuits. Like many American rabbis after him, Aboab was a rabbi struggling to lead his congregation through the challenges of prosperity in the “Land of Opportunity.”

In his poem, Aboab accused his community of forsaking God because of their material success: “My flesh stood up from fear of my adversaries, for from my wealth I forgot my Creator.” Aboab’s accusations of materialism, however, take on a clearer and harsher tone in the vidui, confession. “I have coveted … all of man’s pleasures at all times.” “Towards vanity my eyes fell.” “I stole. I robbed vast amounts of treasures.” In enumerating the long list of evils committed by his community, Aboab probably utilized a measure of hyperbole.

One cannot, however, ignore the common thread binding those evils together, which is the pursuit of material success at the expense of a more pious life. Aboab led the Jews of Recife in the midst of their material success, and could not come to terms with their focus on materialism.