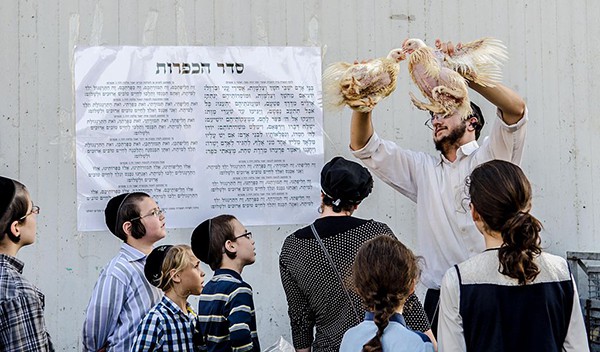 Like many Jews, I do kapparot with my kids on Yom Kippur eve. But like many others, I don’t wave a chicken around my head—I use money and then donate the money to charity. I do the kapparot with money even as I readily admit that the “money version” of the ritual is a recent change to the more traditional chicken-based routine. My reason: I find the chicken alternative just more than I can handle and, honestly, I don’t feel comfortable doing the ritual with a live animal.

Discomfort, of course, is one thing. Taking legal action against the live-chicken version of kapparot is another. But the legality and constitutionality of kapparot is precisely what is at stake in a federal case current on the docket in California. The fact that someone is making a, pardon the pun, federal case out of kapparot may seem surprising. First, you might legitimately wonder what law someone is breaking when they use a chicken for kapparot. Second, and maybe more fundamentally, you might also wonder why isn’t someone engaging in kapparot protected by the First Amendment’s guarantee to protect the “free exercise” of religion. The answers to these two questions are important and not simply because of the current litigation; they tell us something important about why the Jewish community must take a more active role in current debates over religious liberty in the United States.

So What Law Prohibits Kapparot?

Let’s start with the current litigation. On September 28, United Poultry Concerns, an animal rights group, filed suit in California federal court against the Chabad of Irvine, arguing that the ritual practice of performing kapparot with chickens violated California law. The plaintiff’s legal claims are themselves a bit complicated—a Rube Goldberg form of legal argumentation if you will, so you have to keep your eye on the ball.

Here’s step 1: California’s Unfair Competition Law prohibits “any unlawful, unfair or fraudulent business act or practice.” Easy enough. A business violates California law if it engages in an unlawful business practice. But there’s an important twist. If a business does engage in an unlawful business practice, a private citizen—including, potentially, a non-profit animal rights group like United Poultry Concerns—can file a civil suit against the practice. So let’s say a business engages in a practice that the district attorney believes is not unlawful and therefore the district attorney doesn’t prosecute the business; a citizen that disagrees with the D.A.’s conclusion can take advantage of this California rule to file his or her own lawsuit, arguing the practice really is unlawful–again, even though the district attorney disagrees.

Of course, under this California rule, that citizen would have to demonstrate that he or she had been injured by the unlawful business practice—that he or she had “lost money or property as a result of the unfair competition.” This is what gives the citizen “standing” in the first place to file the suit. Otherwise, there’s no reason for the citizen to be in front of the court. In the kapparot case, United Poultry Concerns attempts to satisfy this requirement by claiming that it has been harmed because of all the money it’s lost while investigating the conduct of the Chabad of Irvine.

So next comes Step 2: California law prohibits the “malicious” and “intentional” killing of an animal. This law could make a business practice “unlawful” if that business is maliciously and intentionally killing an animal. And as we know from Step 1, a non-profit can sue a business for engaging in an unlawful business practice. So if a California non-profit believes that a business is maliciously and intentionally killing an animal—such as the ritual practice of kapparot—and this practice causes it to lose money, it can file its own lawsuit claiming that the business is engaged in “unfair competition.”

Hopefully in describing the legal argument, you can already see some of the problems. First, it’s hard to understand how the plaintiffs have been actually financially harmed in this case. Second, the Chabad of Irvine–a religious non-profit–is presumably not a business. Third, the kapparot themselves are not a business practice, even as Chabad does receive some amount of money as a donation from participants in conjunction with the practice. And fourth, it isn’t clear that the actual method of killing the chickens is itself malicious; indeed, the actual killing of the chickens—as opposed to process of swinging the chicken around the head—is done via ritual shehitah, which has never been deemed to be legally “malicious.”

But What About Religious Liberty?

In reading the ins and outs of California law, you may find yourself wondering why even bother–aren’t kapparot protected by the constitutional guarantees of religious liberty? The answer to this query, like all good legal questions, is maybe. And that uncertainty–combined with the plaintiff’s patchwork of California laws–was enough to convince a federal court to temporarily prohibit kapparot in the days leading up to Yom Kippur. This outcome is, in and of itself, troubling.

But the outcome is grounded in Supreme Court precedent. Indeed, since 1990, the Supreme Court has interpreted the First Amendment’s religious liberty protections to only prohibit the targeting of religious practices; where laws apply across the board, the fact that they burden religious practices simply doesn’t raise a constitutional problem. And none of the rules raised by United Poultry Concerns target religion in any way. So the fact that they threaten to prohibit a particular practice does not, in and of itself, trigger the protections of the First Amendment.

Now, there are good arguments to claim that kapparot should still be protected by the First Amendment. Most notably, California’s law against the malicious and intentional killing of animals has a bunch of exceptions for things like “game” or scientific experiments. And where a law grants exceptions for secular purposes, but doesn’t do so for religious practices, it is typically viewed as no longer imposing a prohibition across the board—thereby triggering the protections of the First Amendment.

However, the fact that kapparot will have to be defended in federal court raises a more central problem for how the Jewish community should think about religious liberty. When the Supreme Court interpreted the First Amendment to only prohibit laws that target religion, it also provided a blueprint for how religious individuals might get a reprieve from laws that incidentally bar a religious practice. Instead of asking a court to provide constitutional protection, religious individuals or institutions could ask a legislature to just write a religious exemption into the law. So, for example, if a legislature enacts a law prohibiting minors under 21 from drinking alcoholic beverages, it can also add a provision that allows minors to drink alcohol as part of a religious ritual like communion or kiddush. In this way, the Supreme Court encouraged religious groups to find a new address for their complaints. Don’t call a court–call your senator or congressman.

This asymmetry between the likely legislative reception of different religious groups is precisely why many states, following Congress’s lead, have enacted religious liberty laws to supplement the limited protections afforded by the First Amendment. These laws vary in scope, but they all—in some manner—require courts to balance the importance of religious liberty against the importance of the state’s law–and they subject laws to this balancing even if the law doesn’t target religion. Where the state doesn’t have a strong reason for enforcing the particular law, the religious practice may proceed even though it conflicts with the law. Such a framework, if implemented in this case, would pretty much end the litigation dead in its tracks; it is unlikely that the religious needs of Chabad would be trumped by California’s unfair competition law, assuming the unfair competition law even applies in the first place.

And this new narrative is of particular worry for the American Jewish community. The fact that religious liberty bills have become so toxic has limited the protections afforded religious groups in far less complicated cases. And the kapparot litigation serves as a case in point. In an ideal world, a court would resolve the kapparot case by balancing religious liberty against the importance of California’s unfair competition laws–and employing that calculus, find in favor of allowing Chabad to practice its kapparot ritual. But California has no such religious liberty bill that provides a legal framework for that kind of balancing–and it never will in the current political climate.

But between the two lies a different path–one where the American Jewish community remains true to both its standing as a religious group and as a minority group. To do so requires embracing a legal framework that balances the needs of religion against the needs of others, recognizing that in some cases religion deserves protection, but in other cases religion might have to lose out. All told, the kapparot litigation is a reminder that the American Jewish community, in the coming years, will need to make its voice heard on how to balance the claims of religion against other legal imperatives. And in so doing, the Jewish community will need to provide an alternative–a uniquely Jewish alternative–to the current clash between religious and LGBTQ groups, one that reminds the law that the practices of minority religious groups should not be caught in the crossfire of the current culture wars

Frum and Free? Passover and Jewish Views on Liberty