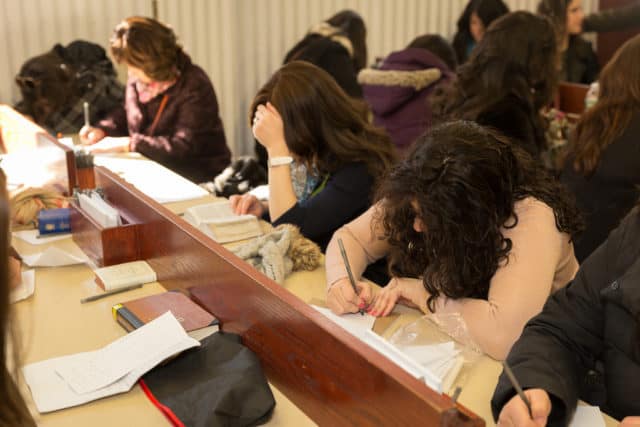 The issue of women’s Torah study spans a mishnah, a few lines in the Talmud, and short comments by a few Rishonim. While the canonical sources had relatively little to say about this issue it became in the twentieth century a focal point to the challenges modernity presented to Jewish communities. The relatively scant source material became the center of heated discussion as this issue was framed—with a key exception that will be discussed below—as a test case for the absorption of liberal values to Jewish communities.

For the better part of a decade, I studied various rabbinic responses to this phenomenon, culminating with the publication of my book, Jewish Women’s Torah Study: Orthodox Education and Modernity. One chapter in this book deals with a position that gave the issue an entirely different framing. This position was not articulated using language like “influence of modernity” or “halakhic evolution”, but rather saw women’s Torah study as part of a process that perfects the world and as part of natural spiritual evolution.

The view in question is that of Rabbi Menachem Mendel Schneerson, the last Lubavitcher Rebbe, and he articulated aspects of this viewpoint on many occasions between the late 1940s and 1992. Recognizing that changes in the role of women in modern society require a different religious language, he wrote extensively about women’s spiritual journeys and the proper foundation for women’s education.

The Rebbe allowed women to study Talmud. On several occasions he wrote it explicitly: “Regarding your reservation about studying Talmud with an eleven year old girl; if it is not too difficult arrange to study those sections that have some practical bearing, for then it is within the purview of studies for women, as explained at the end of chapter 1 of the Alter Rebbe’s laws of Torah study. There are many such chapters and tractates, especially since she is close to the age of twelve when she must accept the yoke of mitzvot” (Igrot Kodesh, vol. 14, p. 99). This is just one of many texts in which the Rebbe clearly stipulates that women can, and maybe even should, study Talmud.

In a 1953 letter to a Bais Yaakov teacher who was alarmed to hear that the Rebbe allowed women to study Gemara he explained that in this day and age, when faith has weakened among the masses and especially the youth, the study is vital because they need to know the beauty of the Torah and the Torah’s viewpoint on daily life (Igrot Kodesh, vol. 18, p. 247).

The Halakhic and Theological Basis of the Rebbe’s Position

The starting point of the theoretical basis for the Rebbe’s position is that women, as men, are commanded to love and revere God. These mitzvot can only be fulfilled, according to Chabad teaching, by the study of Hasidic texts and Torah in general. Women’s education therefore should begin with at least one goal which is true for men and women alike: love and awe of God are the goal of Jewish spiritual life and have to be pursued through intellectual effort that involves textual study.

The natural question is, of course, how to understand the mishnah in Sotah (3:4) that qualifies women’s Torah study as tiflut, interpreted as armumiyut (“cunning”) by some of the commentators. To answer, the Rebbe’s recontextualized the term by asserting that sometimes cunning is a positive trait, in both men and women. Spiritual growth calls for the development of abilities and sensibilities that call for reading in between the lines—a skill set that the Rebbe defines as “cunning”. His reading of tiflut is not the gendered reading of traditional expounders. Rather, it completely overturns the text and legitimizes women’s Torah study (Hitva’aduyot 5750, vol. 3, 297).

For the Rebbe, another important component was the obligation of women to learn about mitzvot relevant to their lives in their traditional gender roles. In Shulhan Arukh (Yoreh De’ah 246:6), Rema writes that women should learn about those commandments that are relevant to their lives. This obligation is not part of the mitzvah of Torah study, from which women are exempt according to all the commentators.

In his teachings, the Rebbe presents this point with a novel approach. While conceding that study of Torah in order to perform a commandment is a hekhsher mitzvah—an act that is not an integral part of the mitzvah yet enables the performance of the mitzvah—he asserted that such an act can in fact rise to the level of the mitzvah itself.

By way of example, the Rebbe discussed the act of carrying sacrificial blood to the altar. This is not an integral part of the offering, but nevertheless, if one has improper intentions while performing this act, the offering is disqualified. Based on this and other reasons, he concluded that women must study Torah daily since it affects their faith and love of God. The halakhic basis for their obligation to study daily differs from the basis of men’s obligation, but in the Rebbe’s opinion, that is of secondary concern. The main point is that Torah study is needed for a meaningful religious experience.

The Rebbe and the Expanded Torah Curriculum

It was not just Talmud. On numerous occasions the Rebbe mentioned that women should study Hasidic texts, since they facilitate an enhanced fulfillment of the six constant commandments which are relevant to all men and women at all times: knowledge of God’s existence; prohibition of belief in any other God; knowledge of God’s singularity; love of God; reverence of God; and not to stray after one’s heart and eyes.

In this framing, women are obligated to study these texts, not because they are included in the mitzvah of Torah study, but because they are included in the mitzvah to love and revere God, and the study of these texts lead to such love and reverence. He includes in the category of things that women must study: “knowledge of the divine, the development of the cosmos, etc.” (Hitva’aduyut 5746, vol. 3, 520).

In addition to developing a personal connection to God, the Rebbe pointed to the fact that women need Jewish knowledge in order to spread Judaism. Women, he noted, have unique qualities that are relevant to outreach work: “The work of bringing Jews closer to Judaism has a special relevance to women. This is clear. This is because such work demands a special approach, with feeling, good heartedness, subtlety—and women have these qualities to a greater degree than men” (Likutei Sihot, vol. 12, 224). But these qualities can only be used if women know enough to teach others.

Not surprisingly, he also addressed changes in the realities of observant communities and in women’s roles. However, even as the Rebbe related positively to these changes, his explanation of this new reality is not predicated on criticism of earlier generations or on defining women’s past role as being marginal. Rather, he uses a language of spiritual growth and evolution towards the promised messianic future:

The Rebbe expanded the feminine sphere to its limits without destabilizing the dimorphic Orthodox universe. He does so by accentuating the positive rather than privative values of a world exclusive to women and by emphasizing “woman” as a subset of “faithful Jew”. Women as a group are freed from the negative images in canonical sources traditionally interpreted to limit women’s roles in religious life.

The Rebbe’s writing shows a clear pattern: women’s education was a vital instrument to usher in the redemption. Even before his assumption of the leadership of the movement, he promoted these ideas, but the more his leadership expanded, the more he was willing to express his novel ideas and interpretations.

Sharpening the Definition of Holeh Lefanenu: The Diamond Princess and the Limits of Quarantine

Finding Meaning in Determinism: How Jewish Thinkers Reconcile the Contradiction between Determinism and Human Purpose