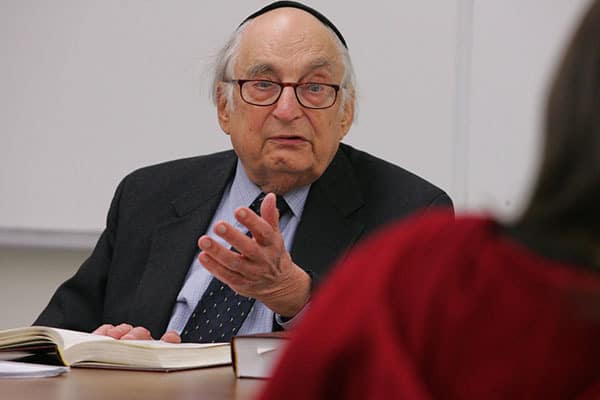 Editors’ note: this eulogy was originally delivered at Dr. Arthur Hyman’s funeral on Friday, February 10, at the Plaza Jewish Community Chapel in Manhattan.

As the great, European-born rabbis of the mid-to-late twentieth century passed away and were eulogized, one heard assessments that descended into clichés about how irreplaceable they were, how one does not find their like anymore, how they preserved the learning and the atmosphere of a golden and unrecoverable age of rabbinic learning and leadership. For all their nostalgia and uncritical celebration, these assertions, like most clichés, captured a genuine reality. We have become accustomed to such language in traditional religious contexts, but as I thought about the loss that we experienced today, I could not help but be transported into this universe of discourse that is so removed from that of the academy and usually even at odds with it.

The loss of Arthur Hyman is precisely the loss of a giant from a generation that we Lilliputians cannot recover. He commanded a breadth and depth of knowledge characteristic of a bygone era. This was brought home to me as I read the preface to his critical edition and English translation of the medieval Hebrew translation of an otherwise lost Arabic work by the premier Muslim philosopher, Averroes. I was struck by his matter-of-fact assertion that he chose the Hebrew version rather than the medieval Latin translation because of the closeness of Hebrew to Arabic, but that he regularly examined the Latin text, sometimes preferred it, and in some cases based his translation upon it. Mastery of both the language and content of the medieval philosophical corpus in Arabic, Latin, and Hebrew was simply taken for granted.

Even the acknowledgments in that preface transport us into an age when giants walked the earth. Dr. Hyman thanks his teachers Harry Wolfson and Saul Lieberman, his colleagues Salo Baron, Paul Oskar Kristeller and Shlomo Pines, and the former President of the Israel Academy of the Sciences and Humanities that co-sponsored the work—Gershom Scholem. For those unfamiliar with the fields of Jewish and Medieval and Renaissance Studies, please accept my testimony that this is as dazzling a list of acknowledgments as could be conjured up by what the medievals would have called the imaginative faculty even at its optimum, prophetic level.

Dr. Hyman was a truly great scholar. He wrote about virtually all the major Jewish thinkers of the Middle Ages and many of the modern age. He addressed key philosophical issues ranging from dogma to eschatology to prophecy. He was the co-author of a widely used reader of medieval Christian, Muslim, and Jewish Philosophy. But he was much more than a publishing scholar of the first rank. He was a teacher who raised generations of students both at Yeshiva University and at Columbia. I was a minuscule part of that legacy. One of his students wrote me upon hearing the sad news, “I did an independent study with him as an undergraduate. Dr. Hyman was so perceptive and had a pivotal impact on my writing.” He demanded careful attention to texts and appreciated his ability to study them in the original with students at Yeshiva.

But he was more than a great scholar and influential teacher. He was a model of sober judgment, ethical behavior, academic leadership, and devotion to Judaism and the Jewish community. On the broader landscape of the academy, he served as President of the Society for Medieval and Renaissance Philosophy as well as the American Academy for Jewish Research. For decades, the Academy was the organization of academic Jewish Studies in the United States, but membership was restricted to a select number of elite scholars. To serve as its President spoke volumes. When the broader based, more democratic Association for Jewish Studies was formed, Dr. Hyman embraced it and came to serve on its Board of Directors.

In the narrower but all-important context of his own university, his self-sacrifice for a greater good was thrown into bold relief at the most critical moment in the history of the Bernard Revel Graduate School of Jewish Studies at Yeshiva. More than two decades ago, there was a move to close the school for financial reasons. To the great credit of the YU student body and the Modern Orthodox community, there was a crescendo of protest, and major philanthropists, including Revel’s current Chairman of the Board Mordecai Katz, saved the school. But a school does not live on bread—literal or figurative—alone.

The revived institution needed a wise, steady, and energetic hand at the helm, and at an age when most people were at the cusp or beyond the cusp of retirement, Dr. Hyman, recognizing the profound importance of Revel for the mission of Modern Orthodoxy, agreed to assume the leadership of a graduate school that he guided with precisely such wisdom for more than a decade and a half.

But his leadership was marked by more than wisdom. To encounter him was to encounter a paragon of dignity and character. He treated everyone with consummate respect. While almost all deans refer to their office administrators by their first names–and there is nothing wrong with this—Dr. Hyman referred to his as Mrs. Washington. (I should add that she more than merited this respect.) Let me attempt to capture this point by reading a sentence that I wrote for today’s obituary in the Times: “A world-renowned scholar, he wore his learning with grace, generosity, and nobility of spirit.”

Finally, he was a scholar of Judaism but also an adherent of Judaism. Academics—even deeply religious Orthodox academics—tend to be reticent about proclamations of faith, and Dr. Hyman did not wear his faith on his sleeve. I was consequently both impressed and deeply moved when he ended his eulogy at the funeral of his first wife with the impassioned declaration, “We believe in a resurrection.” So let me emulate him by endorsing this affirmation of faith and conclude with the verse that follows Daniel’s declaration that “many of those that sleep in the dust of the earth shall awake.” “And the knowledgeable,” Daniel continues, “will be radiant like the bright expanse of sky, and those who lead the many to righteousness will be like the stars forever and ever.”